This is the third Lenovo Yoga Tablet after Lenovo announced and released the first two Lenovo Yoga Tablet 10 & 8 on October 29 last year. Both tablets have become very popular among their owners since their release, despite the generally hostile opinion of most tech writers. 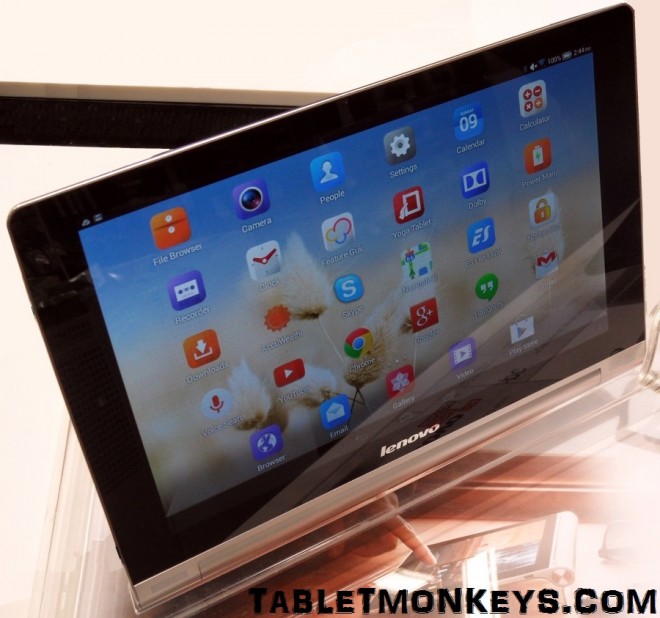 The Lenovo Yoga Tablet 10 HD+ have a 1.4GHz Qualcomm Snapdragon processor (1.6GHz MSM8228 on 3G models/APQ8028 on Wi-Fi), and 2GB of LP DDR2 RAM, which fits nicely in with a more power demanding display. (Amazon have misspelled the name of the processor, but it is the 1.4GHz APQ8028 Wi-Fi model that is for sale.)

Lenovo have also stretched the kickstand flip on the back so that it’s now marginally longer on this model, which makes it stand even firmer when used as a kickstand. Whether you think the cylinder is a lump or not depends on a lot of things. The official press images from Lenovo may even do the Yoga Tablet a disservice, because with the pictures often highlighting the cylinder, it makes the cylinder look bigger than it actually is. With the kickstand in use, the Lenovo Yoga Tablet 10 HD+ with it’s front stereo speakers look like a little TV when viewed from the front.

The rear camera is a upgraded to a 8MP resolution camera, while the front camera remains the same at 1.6MP.

As for the 18 hour battery life, you can get 18 hours out of it, but not with Wi-Fi enabled web browsing. Wi-Fi always consumes a lot of power on tablets and smartphones, but the 9000mAh battery in the kickstand cylinder does add several thousand more mAh than average 10.1-inch tablets, so battery life is still good. The Full HD display on this tablet requires more power than on the cheaper HD model too, so there’s the explanation.

Android 4.4 KitKat upgrade is coming to the Lenovo Yoga Tablet 10 HD+ in May promises Lenovo, which is an upgrade from the Android 4.3 it ships with at release.

At the time of the release, the Full HD Lenovo Yoga Tablet 10 HD+ is $110 more expensive than the $239 Lenovo Yoga Tablet 10 HD. By comparison, I think the HD model is good value for money, which is a large part of its appeal. With the 16GB Full HD version costing $349 at launch, it finds itself in a different price category altogether, and that price makes it more difficult to recommend because of it. I mean, that’s Asus Transformer Pad Infinity TF701 territory, another tablet with great battery life and even better hardware specs.

So as much as I like the regular 8-inch and 10.1-inch models and think they are fun devices, I think the Full HD released today, is pricey at launch. Hopefully Lenovo will cut the price over the summer. But at least there’s a lot of alternative tablets to choose between before then.