I hope everyone is having a relaxing weekend? I noticed that some as of yet unannounced Android tablets from Lenovo are in the pipeline for a 2018 launch, and judging by their model numbers, these Lenovo tablets appear to be Lenovo Tab 5 Plus tablets.

The first ones are Lenovo tablets with model numbers Lenovo TB-X705F/L, so these tablets appear to be successors to the 4G and Wi-Fi editions of the 10.1-inch Full HD tablet Lenovo Tab4 Plus 10.1, launched last year. So it could be called Lenovo Tab 5 Plus, with a Wi-Fi only version and another 4G LTE version.

(UPDATED: These two new Lenovo tablets were unveiled as the Lenovo Tab M10 and Lenovo Tab P10 on August 23, and they will be launched during the winter)

The other new Lenovo tablet I’m unsure about, because it has a new model number series with this being Lenovo TB-605F/L. So unless Lenovo breaks with their model numbers logic, this shouldn’t be a new 8-inch version, but any other size instead. It could be smaller or it could be larger. Perhaps Lenovo too has a 10.5-inch tablet in the works? That would be great. But we’ll have to wait and see what size it is. 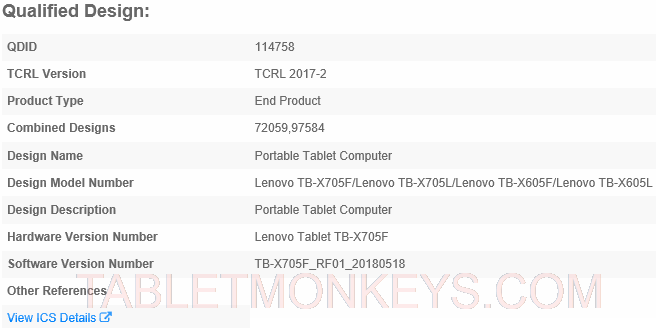 Lenovo Tab5 Plus / Lenovo Tab 5 Plus

Both of these Lenovo tablets had their Bluetooth 4.2 certification published this week, so we can probably expect a launch of these Android 8.0 tablets during the fall.