We wrote in the middle of June that the Qualcomm Snapdragon 835 powered Windows 10 2-in-1 tablet Lenovo Miix 630 would be released on June 27. Lenovo did hold it back a few days, but it has been launched now in the US.

But of additional importance is that the Lenovo Miix 630 is momentarily released with 1GB free 4G LTE data each month for 1 year from select stores. This reminds me of a similar practice from HP that was quite popular around 2013-2015, when a few of their tablets came with free cellular data each month. 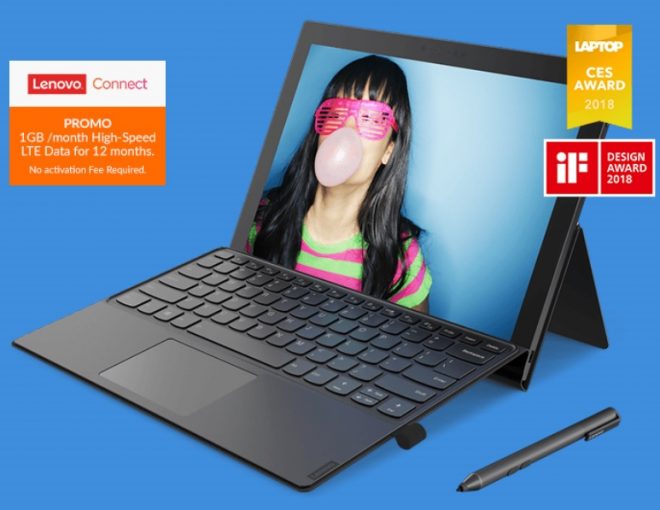 There is another free data option too, which is to activate Sprint AutoPay, which gives owners free unlimited data for the rest of 2018, and this offer is available not only for the Miix 630, but for the HP Envy x2 as well from Microsoft Store

Lenovo Miix 630 is one of the first Windows on ARM computers, unveiled in January, but not launching before now. It ships with the appstore-only Windows 10 S installed, but can be upgraded to Windows 10 Pro for free, which is a recommended move.

A recap of the main specs, lists a 12.3-inch screen with 1920 x 1280 resolution with included Lenovo Active Pen stylus, not to mentions the backlit keyboard. As a mobile-evolved tablet, it has UFS 2.1 storage too, and it has 4GB of DDR4 RAM at 1866 MHz.

Battery life is long, with a 20 hour battery life as measured by the normal video playback standard. Miix 630 has a IR front camera for facial recognition and the ability to log in with your face through Windows Hello, but also a normal 5MP webcam, a 13MP rear camera, and some acceptable 1w stereo speakers. Complete 2×2 Wi-Fi coverage, Bluetooth 4.1, and a USB C port are the other main specs.

The user experience from the users who have been the early adopters of Snapdragon powered Windows computers has been very mixed. And I don’t know what the common denominators are yet. But it may be something to keep in mind for others who have thought about getting one of these tablets. I really don’t see why someone who have done their homework would be surprised by anything about these computers, so it’s good good to get another alternative out there from Lenovo, after HP and Asus entered the market first.