Huawei took to the stage at Huawei’s Developer Conference that just started in China today to announce the latest iteration of the Harmony operating system, which is launching as the HarmonyOS 2.0 today.

An overview of the general principles and future plans for HarmonyOS 2.0 were described today, but more specific details will be announced tomorrow and through the rest of the developer conference.

Huawei announced that their engineers have worked well on developing a very efficient OS that even has a 1.2x faster search performance of a database than iOS Core Spotlight. HarmonyOS 2.0 will come to all Huawei devices eventually, as well as to the devices of other companies, since Huawei will be opening up HarmonyOS 2.0 as open source. 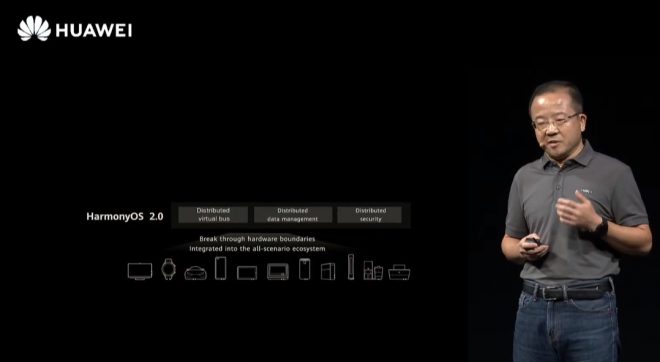 The support for and rollout will happen in three stages starting today for 128KB-128MB terminal devices like TV’s, watches, and cars, then for 128MB-4GB devices in April 2021, before the final rollout for 4GB+ devices in October 2021.

So we will see HarmonyOS 2.0 tablets in 2021, though it still remains to be seen if they will all be tablets from Huawei or if other tablet brands will join in next year too or wait until 2022.

It could be a a good and interesting OS, since Huawei’s skin on Android tablets and smartphones has always been very smooth. Huawei says that HarmonyOS 2.0 is not just a replacement of Android, but that it’s better as it provides a faster and smoother cohesiveness between hardware (for instance between Wi-Fi and Bluetooth), with features such as low latency on hardware, self-discovery and self-networking, and better cross-device data transfer.