A HTC tablet with Android L onboard have been spotted on the Wi-Fi Alliance’s website.

The speculation following the sighting of this Android L driven HTC tablet leads to even more assumptions that this is a Google Nexus 9 tablet.

It’s been suggested by industry insiders in Asia since early 2014 that HTC had already won the contract for a new Google Nexus tablet, and then in June rumors for a Nexus 9 tablet caught a lot of momentum all of a sudden.

Nobody expects to see anything official before any unveiling though, so it looks like we’ll still have to wait for that before we can put speculations to the rest. A good reliable leak might appear a day or two ahead of the unveiling though.

But a HTC Flounder/Volantis tablet is rumored to consist of a Tegra K1 processor, 4GB RAM, with a 8MP rear camera and a 1.6MP front camera in addition to GPS, NFC and a Full HD screen. 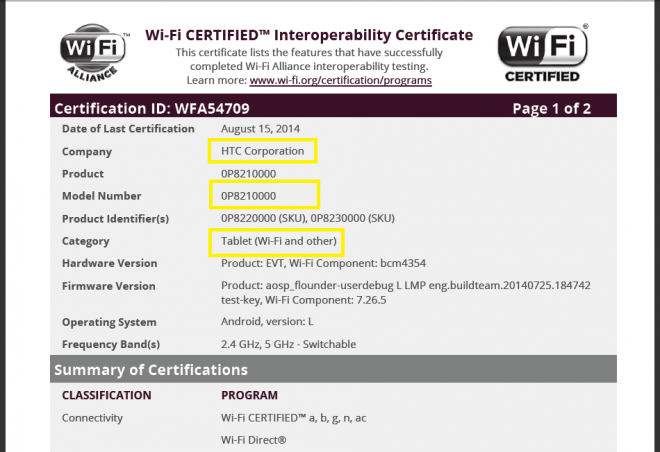