Our friends at Computerworld says it has spoken to a spokesperson at Google who says that Google have in fact canceled its two pre-production tablets, as mentioned in a meeting on Wednesday this week.

Google had not announced any such tablets, but two tablets at least that have partially leaked from before, both of which have been believed to be Google tablets.

The same spokesperson is also quoted as saying that these Google tablets were smaller than the Pixel Slate. 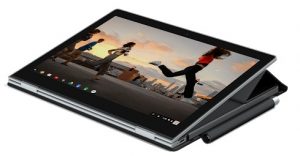 So one question becomes, did Google cancel the Flapjack projects then? The tablets referred to as the codename Flapjack tablets were believed to be 8-inch and 10-inch Google tablets with Chrome OS. I don’t know, but those are the only tablet projects believed to possibly belong to Google in the leaks amassed this year.

Computerworld gathered that some form of new Google Pixelbook should still see the light of day in 2019 though. It just notes that two Google tablet projects have been cancelled.

It may be just as well. Google have only had a few tablets on the market, and even when their tablets were made by Samsung or HTC, they still didn’t sell well. Only the Full HD Nexus 7 2013 model that was built by Asus became a hit.