In line with our first report on the new 2013 Kindle Fire HD tablets two weeks ago, we now have the first benchmark test that increase the likelyhood of the new Kindle Fire tablets being released soon.

(UPDATED: Kindle Fire HDX have been unveiled by now.) 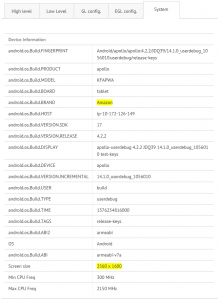 The benchmark test shows a tablet by the codename of “Amazon KFAPWA” undergoing at 3D graphics performance test.
Depending on the authenticity of the test, what this reveals is that the device has a Adreno 330 graphics processor unit, which is considered a very likely match to the previously reported Qualcomm Snapdragon 800 processor.

In addition we are seeing this device tested with a screen resolution of 2560×1600, which is an indication that the “Amazon KFAPWA” being tested is the new 2013 Kindle Fire HD 8.9.