Ever since the end of March is has been known that Huawei has a Full HD Android 7.0 tablet coming onto the market by the name of Huawei MediaPad M3 Lite 10, which is gradually being listed in store after store these days for around €299 in Europe.

But this week a new official Wi-Fi certification showed that an additional MediaPad M3 Lite tablet is in the works too, and it appears to be a smaller one, perhaps an 8-inch version with the model numbers CPN-W09 and CPN-L09. The only specs that leaked out of the certification was the Android 7.0 OS and 2.4 GHz + 5 GHz 802.11 a/b/g/n/ac Wi-Fi cover, which means that the tablet is off to a good start at least. 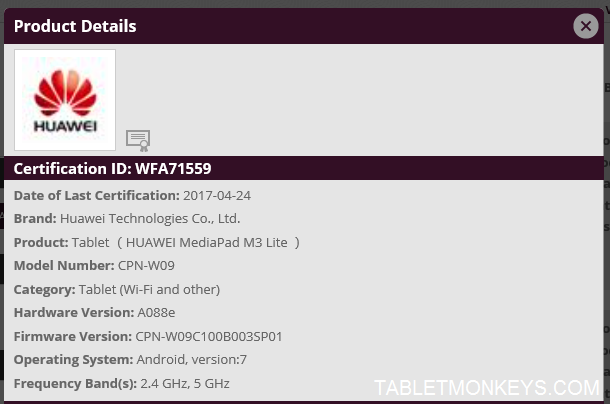 So if Huawei launches an 8-inch Huawei MediaPad M3 Lite, we should perhaps expect the same level of specs, which should also mean that the price should be less than the $299 that the Huawei MediaPad M3 was launched for, and it would compete with the Nvidia Shield Tablet K1 too, which is now the cheapest 8-inch Ful HD tablet that also runs Android 7.0 Nougat.