(UPDATED: For more on the performance figures, the Samsung Galaxy Tab S6 has now been launched)

But it now appears as if the 6GB RAM version has finally shown its presence after it made its first benchmark test during the night with the model number Samsung SM-T865.

Running Android 9.0 Pie, and powered by a octa-core Qualcomm Snapdragon 855 processor at 1.78 Ghz (same as in the Samsung Galaxy S10) accompanied with 6GB of RAM on the “msmnile” motherboard, it achieved the highest benchmark scores ever for an Android tablet. The Geekbench 4 scores came in at 3506 in single-core, and 9788 in multi-core scores.

If we were to compare the SM-T865 to other tablets, those scores are roughly the same benchmark scores as the great Apple iPad Pro 10.5. 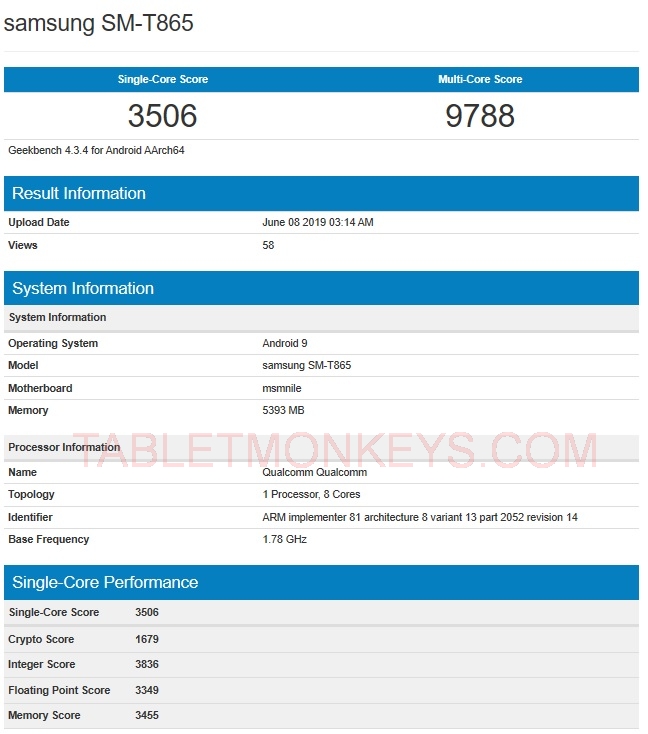 Compared to the most powerful Android tablets up to now, like the Samsung Galaxy Tab S5e and Chuwi Hi9 Pro, the benchmarked SM-T865 model is about twice as powerful, which is a huge step up in terms of performance.

Of course, with twice the power comes a higher price too. The 4GB RAM Samsung Galaxy Tab S5e was released on April 26 for $399 which was a good price.

The Samsung Galaxy Tab S5 might have more than just more power, and could feature a new S Pen digitizer too, something the Tab S5e didn’t get.