Apple unveiled the new size Apple iPad Pro 10.5 at their developer conference today. The new 10.5-inch iPad had been rumored since August last year, and features all the expected specs and a few more. It replaces the iPad Pro 9.7 which is no longer in production. The new iPad Pro 10.5 will be released next week, from $649: https://www.amazon.com/dp/B071GG9D7Q/

With the new larger screen size, it becomes even more of a “Pro” tablet for productivity. Apple says that the the iPad Pro 10.5 offers 20% more display size than the iPad Pro 9.7, but that borders were redued by nearly 40% so that the tablet overall isn’t much larger. It is the first new 10.5-inch tablet to be released since the Samsung Galaxy Tab S 10.5.

It’s not just the larger screen size that makes the iPad Pro 10.5 different from the 9.7-inch model. It had been belived that Apple had picked a different company to supply the new displays, and this was proven right today, when it was announced that both the new iPad Pro 12.9 and 10.5 both feature new displays. To keep in line with the 264 ppi standard, the iPad Pro 10.5 has a 2224 x 1668 resolution display, with lower reflectivity than before, as much as 600 nits brightness (which makes it good outdoors), and a new adaptive display refresh rate feature called ProMotion. 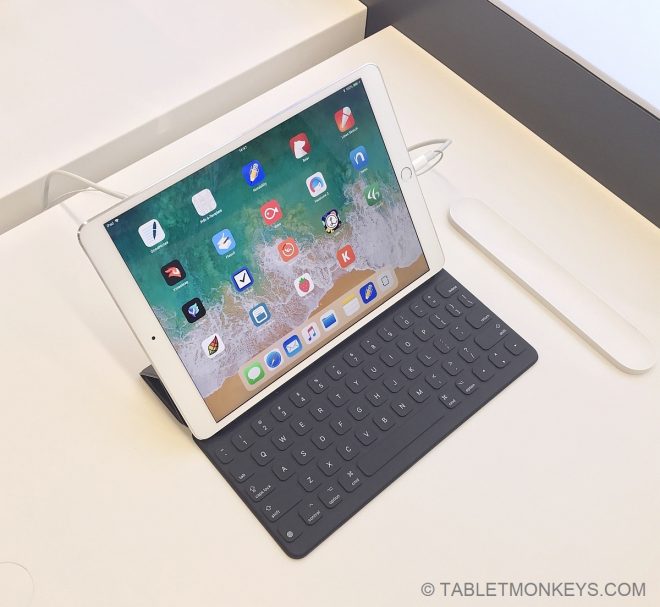 ProMotion can double the display refresh rate from the normal 60Hz to 120Hz, so that scrolling pages in a browser, or sliding images, will look very smooth. But this is adaptable also so that it will adapt the refresh rate to the content to save battery. The new display also reduces latency for the Apple Pencil, which is now just 20ms – 1ms better than the 21ms latency of the new Surface Pen.

The final difference in the new display size, is that this size offers a full-size on-screen keboard, and not only that, but also fits a (optional) full-size physical smart keyboard as well. The new keyboard has support for 30 languages, and Apple says there will also be a Japanese keyboard at launch.

Other major changes apart from the new size, are the hexa-core A10X Fusion chip with 12-core GPU, which is 30% faster than the A9X processor, with a 40% faster GPU performance as well. These are very good figures. 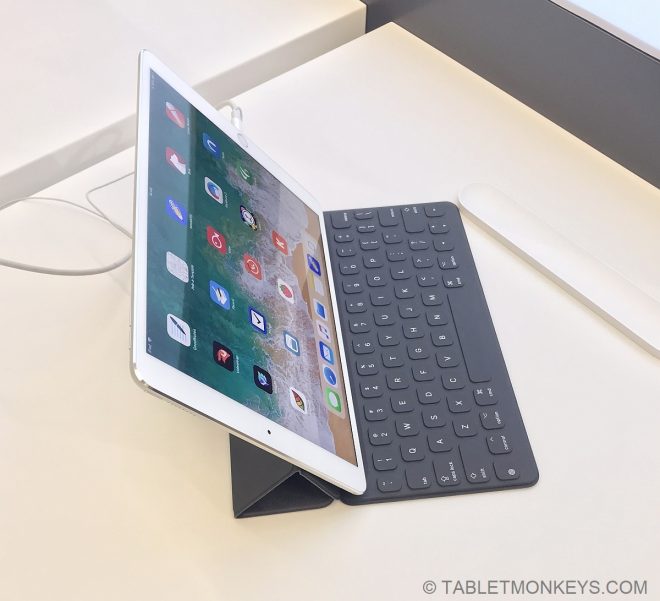 The 12MP rear camera records 4K video at 3840 x 2160 with LED flash, while the 7MP front camera records 1080p videos and can use the display as a flash. It also has quad speakers, with one speaker in each corner.

Apple even announced new accessories for the iPads today such as a USB camera adapter, a SD card reader, a USB-C to Lightning Cable, a USB-C power adapter, and new smart covers in optional polyurethane or leather. The Apple Pencil pen is too wide to slip into the tablet, so Apple came up with the idea of letting the pen slips into the new sleeve for the iPad Pro 10.5 instead.

A tablet computer isn’t without an OS, so while it will ship with iOS 10 for now, Appe spent a lot of time today teasing the upcoming featuers of iOS 11 that will be released during fall, and that will bring a lot of Windows 10 features to the iPad, which will be great. 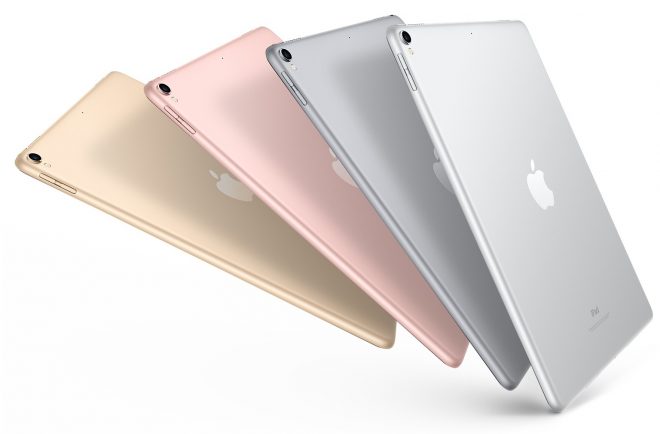