It is marketed in the flyers as being 4.8 mm thick, which would have made it the thinnest tablet in the world, even beating the Samsung Galaxy Tab S2’s, but this thickness only pertains to the edges of the tablet. Measured in the middle, it is a little thicker than that. But it is still a very thin tablet. 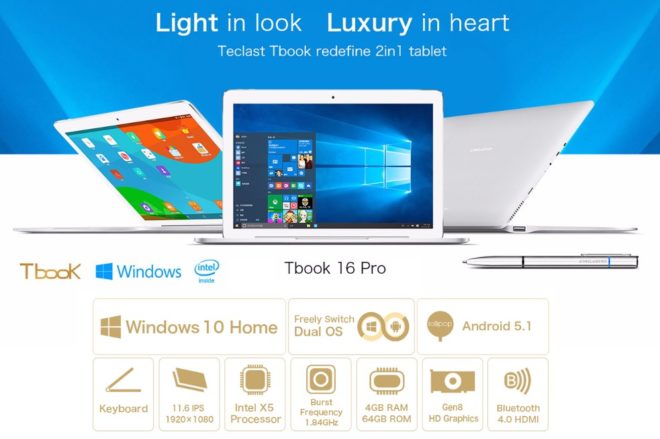 Another highlight is a USB 3.0 port, alongside the USB 2.0 port and the micro-HDMI port.

The battery capacity is 7200 mAh, while we don’t know how that would translate to hours of battery life. Teclast Tbook 16 Pro has 802.11 a/b/g/n Wi-Fi support, and Bluetooth 4.0, stereo speakers, and a 2MP front camera.

Tbook 16 Pro is marketed as a 2-in-1 tablet, but the original keyboard docking isn’t available yet. But when the keyboard becomes available too, it adds two more USB ports on the sides, as well as a solid stand for the tablet.

This tablet also has digitizer support, but the stylus pen is optional.