I discovered that an unannounced new Samsung tablet that appears to be destined for a launch in 2020 was registered as Wi-Fi approved today by the official Wi-Fi certification body with the model number Samsung SM-T307U.

That sort of model usually indicates that it’s a tablet with cellular capacities, typically 4G, but 5G is also an option now. The other part of the model number doesn’t say anything in itself.

What we know though is that Samsung’s SM-T3xx model number series have up until now belonged Samsung’s line of 8-inch Android tablets. But when checking with other sources, there’s still no other indication of the other specs and dimensions of this tablet, so we’ll have to wait for the next leaks to find out if this is an 8-inch tablet or not.

But at least we can see that this Samsung tablet featured dual-band 802.11 a/b/g/n/ac Wi-Fi 5, and Android 9.0 Pie during the approval. 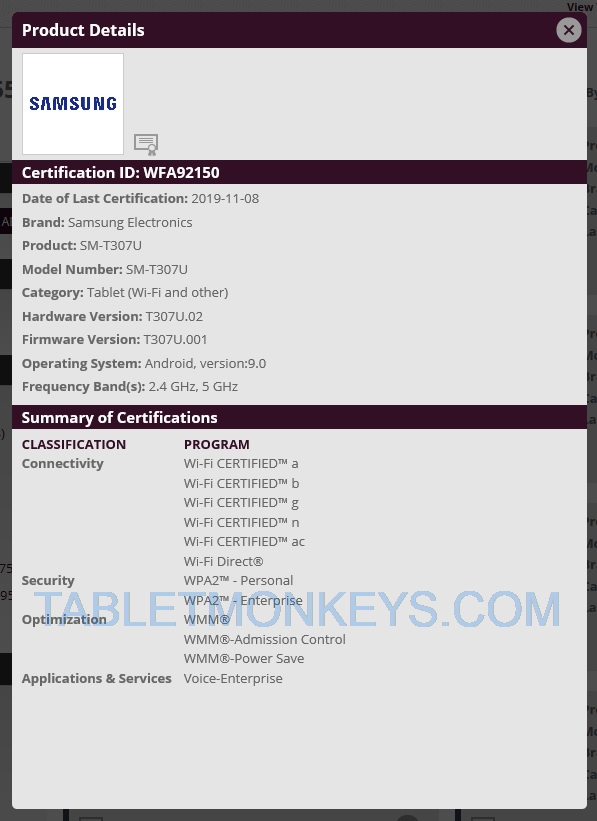 I know that a lot of people want a powerful 8-inch Samsung tablet with Android though, something that would succeed the highly rated Samsung Galaxy Tab S2.