The Teclast X3 Plus that was promised during the autumn is being seen for the first time today, and it is already placed in store on Gearbest, far ahead of the pre-order kick off that will commence a while later.

So with the first Intel Celeron tablets, we now get tablets that offer more of a performance than the Intel Atom processors but at the same time without costing as much as tablets with Intel Core processors. And the Teclast X3 Plus specs configuration is interesting to study, and may set something of a standard of what to expect ahead when more Intel Celeron tablets will come onto the market in 2017.

The Teclast X3 Plus is a 11.6-inch Windows 10 tablet, with a design and form factor that was introduced on the Surface Pro 3, and that we have seen many tablet brands take after ever since. The 11.6-inch screen has a display resolution of 1920 x 1080, and the processor then is the quad-core 1.1 GHz – 2.2 GHz Intel Celeron N3450 processor with the integrated Intel HD Graphics 500 GPU. 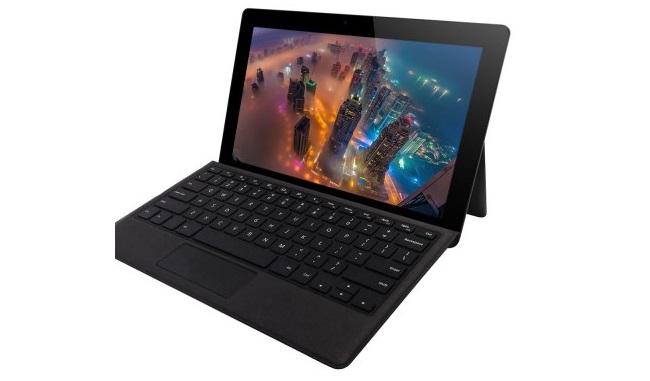 As for RAM, it has 6GB of DDR3L RAM, and I personally like the fact that Teclast has made the Teclast X3 Plus something of a performer, but without making it so powerful that it would cost too much for the customers it was originally intended for. This particular Intel Celeron N3450 “Apollo Lake” processor supports a maximum of 8GB of RAM.

The X3 Plus has 64GB of storage with microSD card support up to 128GB, and it’s equipped with a USB 3.0 port, a micro-HDMI port, a DC power jack, and a 3.5mm audio combo jack. The tablet has a 2MP front camera and a 5MP rear camera, as well as stereo speakers.

The Teclast X3 Plus battery capacity is 8000 mAh of battery power, and the battery life is one of the sides to this Intel Celeron tablet that it will be interesting to see in practice.

Wireless connection meanwhile is supported by 802.11 a/b/g/n Wi-Fi, and Bluetooth 4.0. The keyboard is similar to the keyboards we find on Surface Pro tablets or the Acer Switch Alpha 12 these days. We will learn more about the keyboard later.

The weight of the Teclast X3 Plus is 909 grams, which is more than we usually see on 11.6-inch Intel Atom tablets and Intel Core tablets With the same design. But the Teclast X3 Plus does have a decent sized battery and a built-in kickstand, so that will account for some of that weight.