The BlackBerry subsidiary Secusmart have announced the SecuTABLET for governments and enterprises through a secure edition of Samsung Galaxy Tab S 10.5 after a collaboration with Samsung and IBM.

The SecuTABLET is presented at CeBIT 2015 these days, where the company Secusmart is presenting this tablet together with IBM. IBM have among other responsibilities been the chief engineer in the secure “app wrapping” on this tablet.

SecuTABLET supplements the BlackBerry 10 SecuSUITE, and it supports encryption of data and voices. The development seems to come out of studies that shows users would like to access more data on mobile devices, but that regular devices are not secure enough for governments to allow it. The purpose of the SecuTABLET is to provide secure enough high-security mobile communication in a tablet to allow increased access to sensitive sources.

Earlier this year a secure Blackphone+ Tablet was announced from Silent Circle as well, but that company doesn’t have the same collaborations or ecosystem in place like Secusmart does. But the Blackphone+ Tablet will become cheaper and be more available to consumers than the SecuTABLET will. 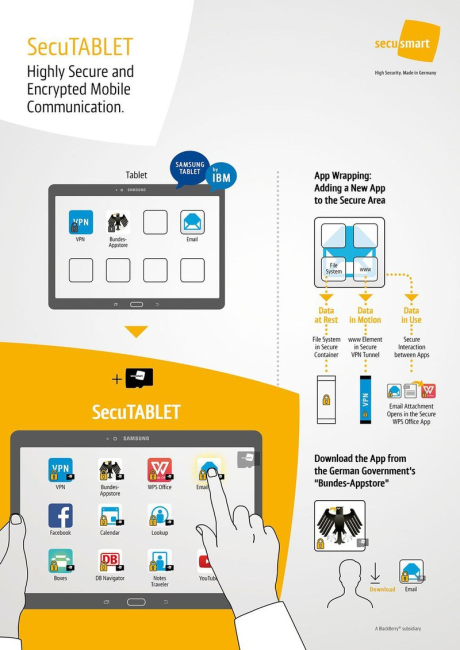 Blackberry Playbook being pulled from stores