The much advertised Super AMOLED tablets Samsung Galaxy Tab S that were launched on June 13 is about to get a processor upgrade.

In the 1st generation Samsung Galaxy Tab S, the Wi-Fi models were powered by Samsung’s octa-core Exynos 5420 processor, a processor that was first launched in Q3 2013. And through a series of benchmark leaks, we now see that Samsung is about to launch a new and very powerful Samsung Exynos 5433 processor in the new Galaxy Tab S. 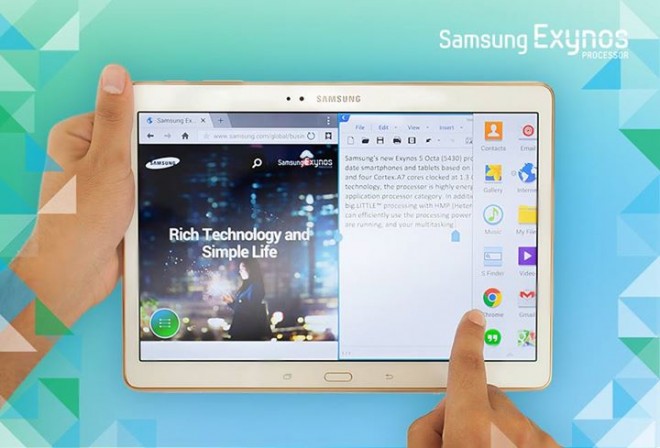 At least that would be the case it the model number had been SM-T800, which denotes the current Wi-Fi models. The new Samsung Galaxy Tab S that have been spotted however have model number SM-T805S/K/L, meaning that it’s the LTE version that’s being replaced.

The 4G LTE models have up to now been powered by a quad-core 2.3GHz Qualcomm Snapdragon 800 processor. But as Samsung’s new 5430 series processor supports 4G LTE Advanced Cat 6 with 300Mbps download speed and 50Mbps upload speeds, Samsung is wise to go with their own processor. This is the same processor that can be found in the new Samsung Galaxy Note 4

smartphone by the way.

And, on top of that, the LTE version will now become more powerful than the Wi-Fi version too.

Release of the new Samsung Galaxy Tab S with the new Exynos 5433 processor is starting in South Korea any week now, but with the complicated cellular business in the US, it will take a little longer before it’s brought state side.