The as of yet unannounced Samsung Galaxy Tab A7 tablet that only leaked for the first time two days ago, was registered as FCC approved today, which gave us the first indications of what to expect.

Samsung Galaxy Tab A7 (Samsung SM-T500/505/507) has previously only leaked with the Bluetooth 5.0 specs. But today’s FCC approval brought with it both the exterior dimensions as well as an illustration of it, which indicates that the Samsung Galaxy Tab A7 is a tablet in the 10.5-inch range. It measures 247.6mm by 157.36mm, and by all looks and means indicates that this tablet is in the 10.5-inch range.

It is certainly smaller than an 11-inch tablet, but larger than a modern slim bezel 10.1-inch tablet. These days tablet brands from Apple to Lenovo to Samsung are launching tablets with new specific sizes between 10 and 11 inches, so it’s difficult to tell what precise screen size it will have, but it should be very close to 10.5 inches. 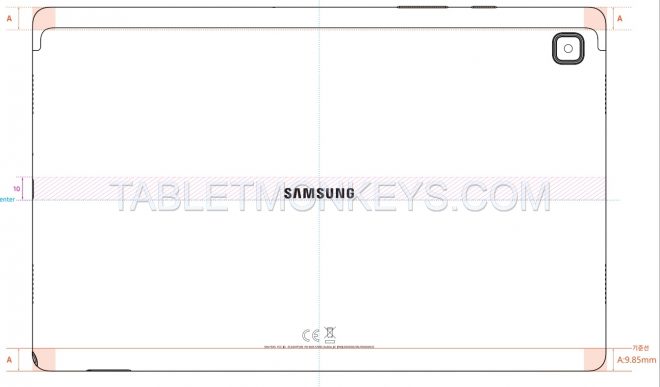 The drawing also shows us that the Samsung Galaxy Tab A7 tablet has a rear camera without a LED flash, and it appears to feature quad speakers, a USB C port on the side when viewed horizontally, a memory card slot (and SIM card slot for the 4G LTE version seen here), and possibly even a digitizer pen slot on the bottom corner.

This could be a 3.5mm audio jack too, but most likely we are looking at the slot for a Samsung S Pen digitizer pen.

Based on some of the other information I saw, not only was it tested with the TA50JWE Samsung travel charger, but it may have been tested against wireless chargers too.

So perhaps Samsung is following in Amazon’s footsteps and introduces wireless charging on the Samsung Galaxy Tab A7 too, like we’ve already have on the Amazon Fire HD 8 Plus.

Based on the model numbers for the Samsung Galaxy Tab A7, this should be a mass market tablet that will probably be widely available, including 4G versions sold through wireless carriers.