Samsung is very busy on the tablet arena these days, as I noticed that they just received the Bluetooth certification approval for yet another unannounced Android tablet today.

It’s called the Samsung Galaxy Tab A7, and carries the model numbers Samsung SM-T500, SM-T505, and SM-T507 for all the Wi-Fi and 4G cellular versions.

Nothing spectacular in way of specs was revealed today though, just your standard Wi-Fi 5 (802.11 a/b/g/n/ac Wi-Fi cover), and Bluetooth 5.0. But then again that’s all that the official Bluetooth certification tends to reveal anyway, along with the tablet names. 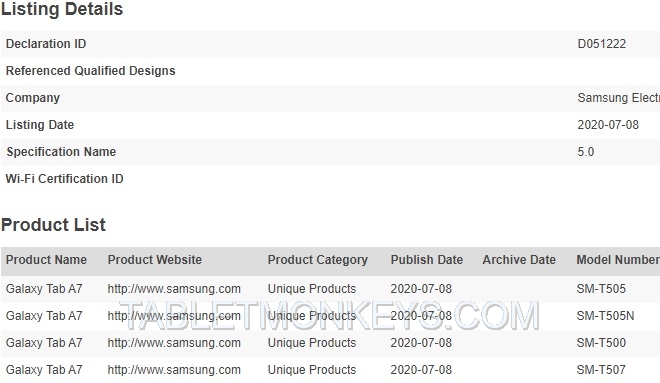 The first Samsung Galaxy Tab A7 tablet leak comes just as Samsung made the official announcement for the much anticipated August 5 Galaxy event too. So we should expect some new tablet announcements before or around that date.