Samsung’s next 7-inch Android tablet Samsung Galaxy Tab A 7.0 (2019 Model) with model numbers Samsung SM-T295 and SM-T290 have now been FCC approved too as filings over the course of the last week demonstrates.

There are a few scenarios the pick from in this regard. Samsung have previously launched 7-inch Android tablets as combined tablets and phones in some emerging Asian markets aimed at those who might not be able to afford both. 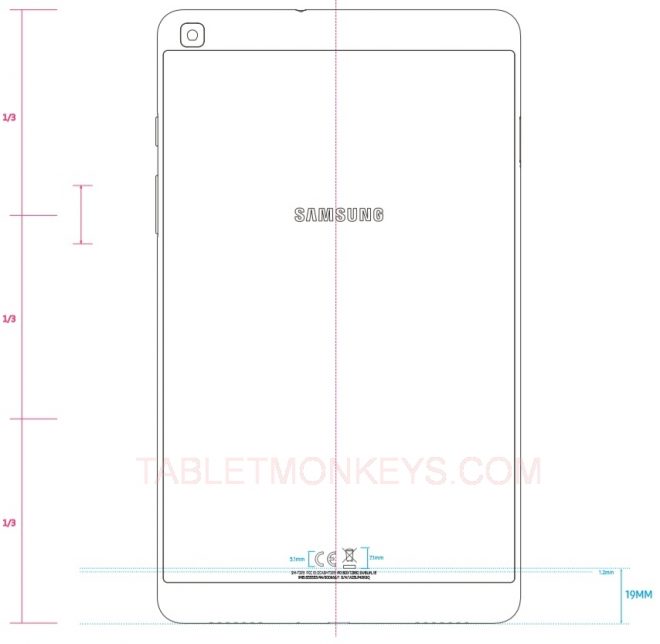 Samsung itself labels this tablet as a “Multi-band GSM/WCDMA/LTE Phone with Bluetooth, WLAN” in their filings with the FCC. But as the illustrations submitted to the FCC as well as the model series suggests, it has a tablet form factor, and in internal communication Samsung refers to it as a tablet.

Since the new 7-inch Samsung tablet was benchmarked 2 months ago already, we already know the main specs, but from the FCC filings we also learn that it has a 4980 mAh battery and dual-band Wi-Fi in addition to the 4G LTE cover. This means that the battery capacity is almost 25% higher than that of the current Samsung Galaxy Tab A 7.0 which already has a 9 hour battery life.

Other specs includes Android 9.0 Pie, a quad-core 2.0 GHz Qualcomm Snapdragon processor, and 2GB of RAM. And as we can see by the illustrations, we also get a 3.5mm audio jack and a USB port on this upcoming Samsung tablet.