Finally, the brand new Samsung GALAXY Note 10.1 was officially unveiled and released for pre-order and an exclusive early sale today at the Lincoln Center in New York City at 11:00 EDT. 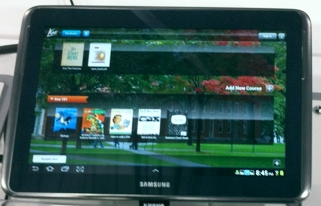 With Students in Mind – Kno on Galaxy Note 10.1

It goes on sale worldwide August 16.

During the presentation, the participants was given a demo of all the main features that makes the Galaxy Note 10.1 special and stand apart from other tablets, including Samsung’s other tablets.

Samsung GALAXY Note 10.1 Review
The Samsung Galaxy tablet line have for a long time been the bestselling tablets after the iPad, and the sales figures don’t lie; Samsung Galaxy tablets have had a 9,2 percent market share in the last quarter, way ahead of its competitors.
And the Samsung Note Smartphone have sold 10 million in the last nine months, while the Galaxy S3 Smartphone have sold 10 million units in the last two months according to Senior Vice President at Samsung mobile marketing, Younghee Lee. Which makes it seem like Samsung is on a roll these days.

Multitasker and Creativity Assistant?
Technically it has already been scoring high on benchmark tests, where it has even beaten the formerly leading Asus Transformer Pad Infinity TF700 on several levels, even the sensors and the other hardware underneath is a strong point with this tablet, from the GPS to the powerful Wi-Fi. So we know it can deliver performance, but how does it practical usability fare?
Samsung is trying to market the 10.1 Note as a (the first) True Multitasker and A New Way of Productivity, that will unleash anyone’s creativity and their need to work with many forms of data (browser, email, images, notes, graphic tools, apps, spreadsheets, music, video) all at once.

During the Galaxy Note 10.1 presentation in NY today, Samsung had people from creative profession come on stage such as movie director Baz Luhrmann and fashion designer Zac Posen, to share their user experience with Galaxy Note 10.1 in an attempt to underline who this tablet is meant for, and to point out the 10.1 Note’s features.

Design
The Galaxy Note 10.1 may not seem as solid as the Galaxy Tab 1 and Galaxy Tab 2 models, but this is just a visual effect. In reality it seems like a solid tablet hands-on. It’s also a very thin tablet, which is great. Thinner than the iPad even. It feels well to hold. It’s well balanced and it has a elegant bezel that has just the right frame width for both entertainment and productivity use.

If you look closely at the pictures, you’ll notice dual front speakers on the side of the display. This is a very welcome improvement over the otherwise poor speaker placement on other tablets. The sound quality is pretty good, and the volume can be set surprisingly high. When you hold it and play a video or some music, you can feel the bass thumping in your fingertips. Pretty impressive for a tablet.
It has a power/sleep button, volume rocker, headphone jack, microSD card slot, (and SIM card slot on the 3G) on the side.

S Pen
The concept behind the S Pen is to give users the same advantage and feel of using pen and paper, but with all the added benefits of doing this through apps that will do anything from convert your writing to text or help you sketch better, with a very accurate pressure sensitive display with electromagnetic resonance technology.

For instance, by using Shape Match, the app will correct shapes of sketches (if you want it to), giving you a quick opportunity to sketch figures, pie graphs, geometrical figures, anything, very quickly, but then letting Shape Match ‘correct’ them into organized shapes which can then be used for presentations immediately.

A mathematical app called Formula Match does the same thing for math, but then in addition draws diagrams based on the formulas automatically.

The S Pen included in the 10.1 Note is a one-size-fits-all approach where you can buy 2 other pens from Samsung should you want a different feel to it, and Samsung are also including replacement tips for the original S Pen. The S Pen has embedded a slot at the bottom of the tablet, that you click and lock the S Pen inside, like on many smartphones, both to keep it from disappearing and to keep it handy.
Taking out the S Pen will automatically launch 5 apps intended to improve the use of the S Pen.

In addition, when using the S Pen, the display has palm rejection, which means that any accidental touch of the screen with the palm of your hand should not create any unwanted input while you are sketching, writing, or using the S Pen any other way. However, as with all new technology, it’s not all there, and occasionally the screen does register accidental input from the hand in this mode, so don’t rely on the palm rejection technology as if it was totally reliable. If you have the Note Smartphone, then you are already familiar with this technology.

Display
In the post-retina-display era of tablets, nobody is impressed with the Galaxy Note 10.1’s pixel density and 1280×800 TFT LCD display. That’s not to say the 10.1 Galaxy Note has a poor display, rather that most people would expect higher resolution for the kind of money the 10.1 Note is asking.
It has 90 degrees viewing angles that are great however and the screen is very bright, which should make it more useable outdoors.

Cameras
Very reminiscent of the combined overexposure and smudge experience of the earliest digital cameras. In addition, there’s a considerable lag between focusing and snapping a photo, another flashback to the early digital camera problems. This is disappointing, and will probably not be forgiven by creative professionals if they are intended to rely on this camera for implementing ideas based on photos they have just snapped of their objet d’art.
However, if you are in a creative profession, it’s unlikely that you haven’t got a better camera than this already that will outperform any tablet camera by a long shot.
The video recorder is somewhat better than the photo camera the way it handles changing light very smoothly, but this camera too is for use in a pinch only.

Media
The 10.1 Note features Allshare Play which together with IR-Blaster and Peel’s Smart Remote app means that it can even be used as a universal remote control for you TV, DVR, DVD, or whatever, connected to other computer devices, or simply put – control your media with it. The Video Hub is integrated with the likes of Netflix, Samsung’s own growing ecosystem, and others, but I didn’t see Hulu yet.

Apps
Samsung’s TouchWiz skin offers 21 pre-loaded apps when you buy it. And in the spirit of the multitasking soul that the Galaxy Note 10.1 has, you can run more than on app at the time. To start a split-screen multitasking operation you simply click the Multiscreen button and start engaging with your additional program in the additional window. However, the multiscreen multitasking feature only works with the browser, Polaris Office (word processing, spreadsheet, and presentation), video player, email, gallery, and S-Note.

To make notes, the S Note app comes with 8 different templates (General Notes, Sketchbook, Meeting Notes, Magazine, My Diary, Travel, Book, Memo), though these templates seems a little too generic, so I expect most people will be using a blank template.

The 10.1 Galaxy Note also comes with “mini-apps” that can be placed anywhere on the screen, and include Alarm, S Note, Music Player, Email, Calculator, and World Clock.

Learning Apps
Some other integrated apps are S Planner to schedule appointments with, Knowledge Search, and Learning Hub. 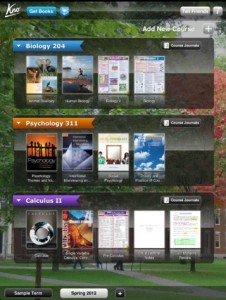 Samsung announced today that they want to make learning through tablets a priority. So they are hooking up with Kno, an education software provider, to enable Kno’s e-textbook platform preloaded on the 10.1 Note, which means that k-12 or university students can download interactive textbooks (150 000 books) and use the S Pen to highlight texts in these books. This feature has only been available on the iPad previously.

Further, it also comes with these featured apps: ClickPlay, Poems of Tang, LAZY RUN!, Baby Lesson, U Magazine eMagazine, Throne of Swords, Dungeon Hunter 2 HD, and iSink U, to name a few. Naturally it has all the regular Google apps, and of course you have access to other Android app stores, such as Google Play with 400 000 apps and the ever expanding Amazon App Store.

Conclusion
There wasn’t much gasp from the audience during the presentation. Not the same kind of awe you see at iPad presentations, and it has nothing or little to do with loyalty or preference. The problem was, when Samsung was teasing with a preview presentation of the Galxy Note 10.1 in February, this was touted as a slightly different device. It had a more solid and exclusive feel, it promised a higher display PPI, a heavier S Pen, and a few other features that would inspire confidence, a sense of quality, and new standards over the whole tablet and for Samsung. It will become even better when Samsung releases a Android 4.1 Jelly Bean update soon, and it’s a bit of a shame it didn’t get that upon its release. But don’t get me wrong – this is a great Android tablet. 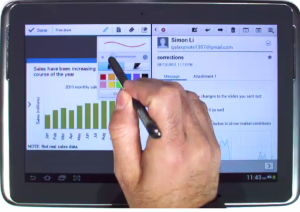 It may be that Samsung will eventually reach a different audience than it has been aiming for. The Galaxy Note 10.1 will serve as a very attractive gaming tablet, given its hardware performance, and students will be drawn towards the 10.1 Note too, but for the discerning creative professionals, it will be interesting to see how they adopt to it. No doubt, given the sync features of the 10.1 Note, this tablet will be popular with users of other Samsung devices based on the compatibility itself. While Samsung is continuously expanding it’s ecosystem, even with the extra incentive this offers, the competition in this price segment is tight for the 10.1 Note.

A different perspective could be that this tablet may be hard to demographically define. I’m sure there are people who will find use of exactly the kind of qualities and features that the Samsung Galaxy Note 10.1 offers, and who will buy this tablet fully aware of its shortcomings. Taking the wide use of tablets into consideration today, from space exploration to medicine, from sales to car mechanics, from subway computing to children’s games, the use of tablets is happening everywhere, and in that respect, there’s someone who will feel precisely that the 10.1 Galaxy Note is the most useful tablet computer for them.

You might want to see the high rating buyers have given it on Amazon.com 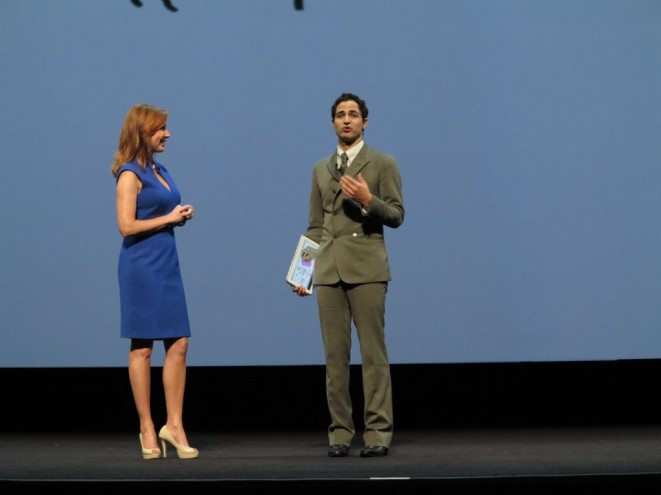 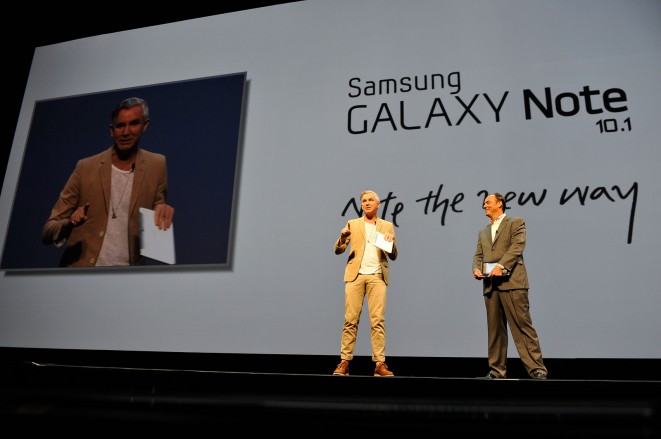 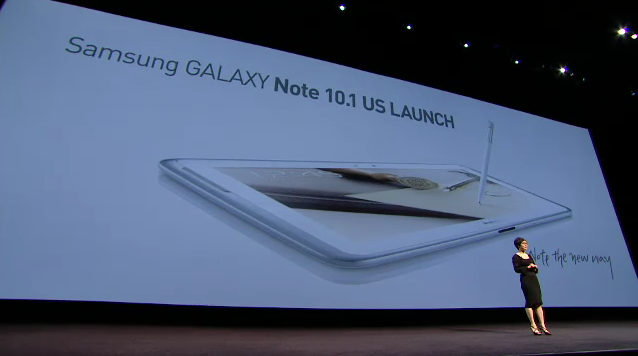 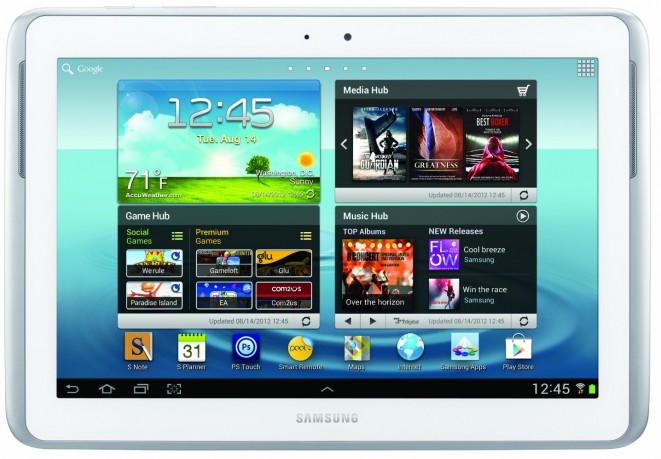 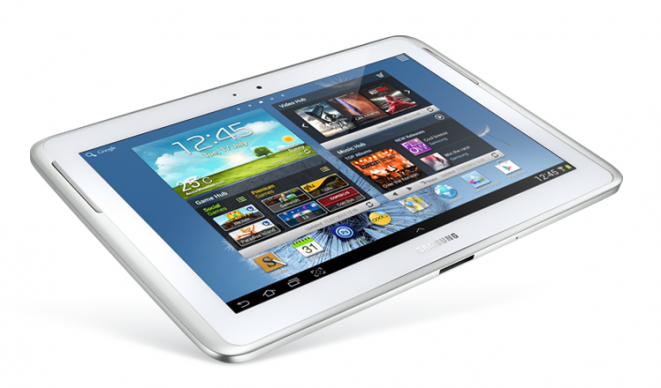 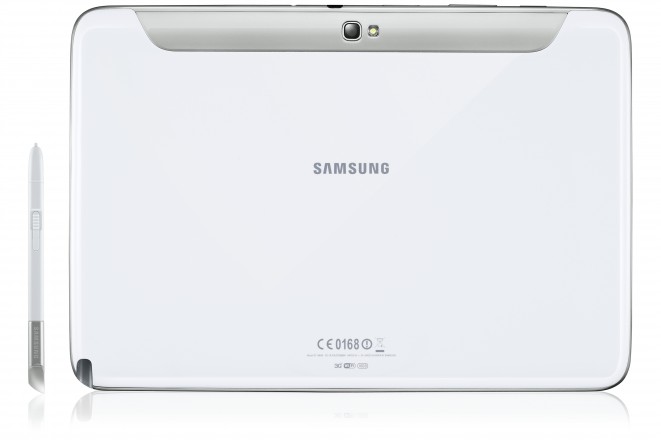 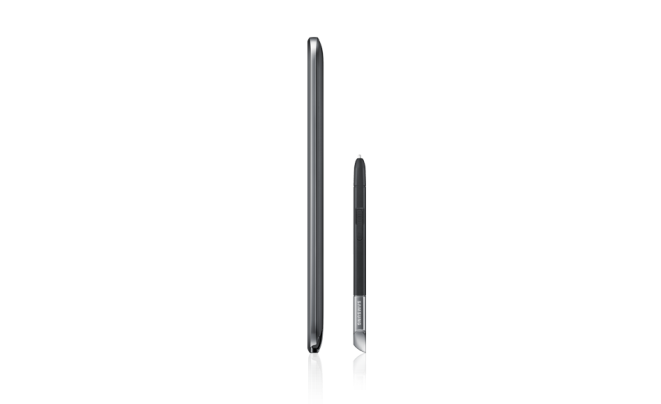 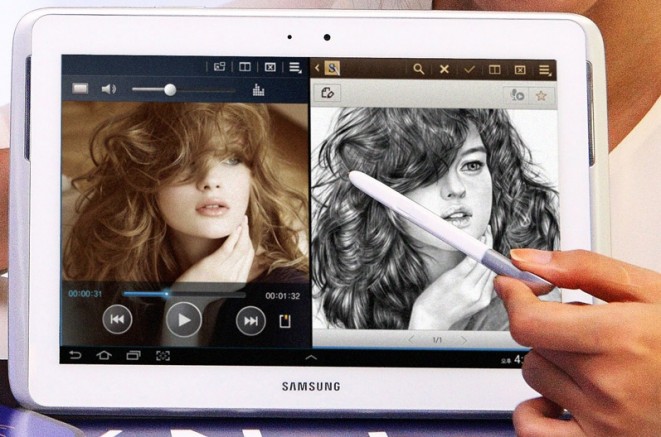 Buttons on the Samsung Galaxy Note 10.1 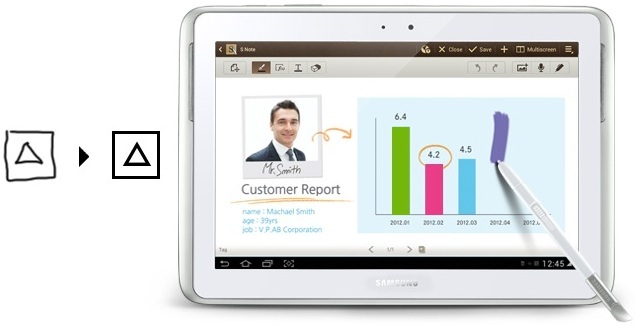