Samsung seems to be working on new 8-inch and 10-inch tablets with AMOLED (active-matrix organic light-emitting diode), their first tablets to go into production again with this technology again ever since Samsung ended the production of their much adored Galaxy Tab 7.7 4G LTE.

The AMOLED displays are available on some of Smasung’s phones, and Samsung is the world’s leader in the use of OLED technology, so the return of this technology in some of Samsung’s tablets had been expected for a long time. 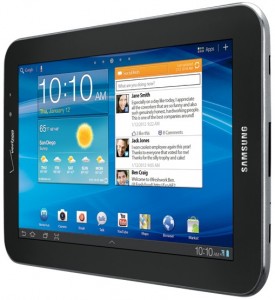 Likely to utilize a 2560 x 1600 Full HD+ Super AMOLED, similar to the display seen on the Galaxy S4 and Galaxy Note 3 smartphones, these displays consume less power than regular display panels, which is just what smartphone and tablet user like.

The two new 8-inch and 10-inch tablets from Samsung Electronics are expected to be launched in the early part of 2014, alongside the unveiling of the new Galaxy S5 smartphone. Which makes us think that these are Android tablets.

Samsung is seen to focus particularly on tablet displays in an effort to compete with the displays of the iPad retina tablets. So possibly these AMOLED tablets will be lighter as well.

The 10.1-inch Android tablet that comes closest to the 469 gram iPad Air in weight, is currently the Sony Xperia Tablet Z at 495 gram.