Toshiba have been a contender in the tablet market all along, but have never made truly iconic tablets for people to get all excited about. With the upcoming release of these three new tablets though, Toshiba might become a tablet manufacturer to consider once again.

It’s the first two models that are the most exciting. Toshiba Excite Write and Excite Pro are both Android 4.2 tablets that both feature a 10.1-inch iPad retina-beating 2560×1600 resolution PixelPure display, in addition to Harman Kardon stereo speakers with DTS Premium Voice Pro audio processing (it’s even branded onto the bezel itself), and the new Tegra 4 processor powering all of it.

Toshiba Excite Write
The mains specifications is to begin with the 10.1-inch (2560×1600) display, using Corning Gorilla Glass 2. Excite Write is outfitted with a digitizer display and precision TruPen with 1024 pressure points. This pressure sensitive Toshiba TruPen comes with the TruNote app. An 1.8GHz NVIDIA Tegra 4 processor powers the tablet together with 2GB of DDR3 RAM. It further runs the latest Android 4.2 Jelly Bean, have 32GB of storage + microSD support, in addition to an 8MP rear camera, micro HDMI and micro USB ports. Because of the TruPen feature, the Toshiba Excite Write have a retail price of $599.99. 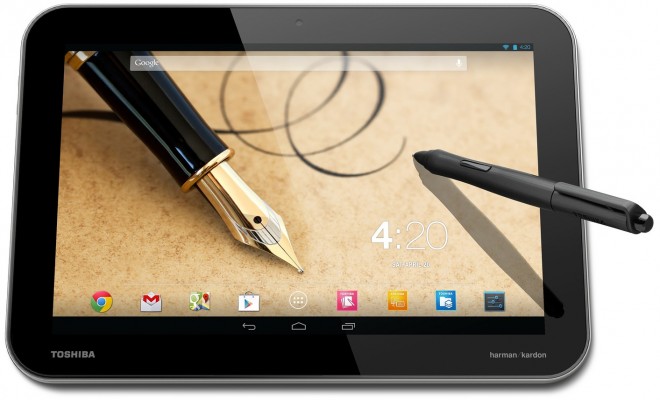 Toshiba Excite Pro
The Excite Pro is cheaper, with a retail price of $499.99, since it doesn’t feature the same digitizer display. But all the specs are the same otherwise. The 10.1-inch (2560×1600) display, Harman Kardon stereo speakers, 1.8GHz Tegra 4 processor, 2GB of DDR3 RAM, Android 4.2, 32GB memory with microSD support, 8MP rear camera, micro HDMI and micro USB port is all there. Just for $100 less. 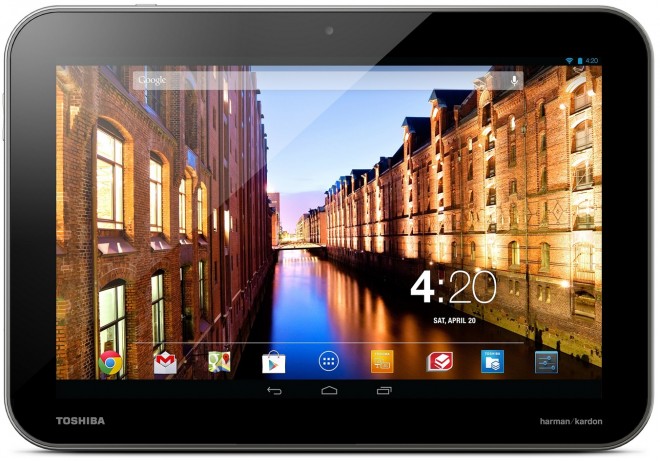 Toshiba Excite Pure
Excite Pure is even cheaper, but only because it doesn’t offer the same power as its two siblings. The 10.1-inch AutoBrite display have half the resolution at 1280×800. It is also powered by a older Tegra 3 processor. But it is still has the latest Android 4.2 Jelly Bean, and 1GB of DDR3 RAM. Other specs are 16GB memory with microSD card support, a 3MP rear camera, DTS Premium Voice Pro stereo speakers, plus micro HDMI and micro USB ports. The retail price for Excite Pure is $299.99 which is better value than the outgoing Toshiba Excite 10 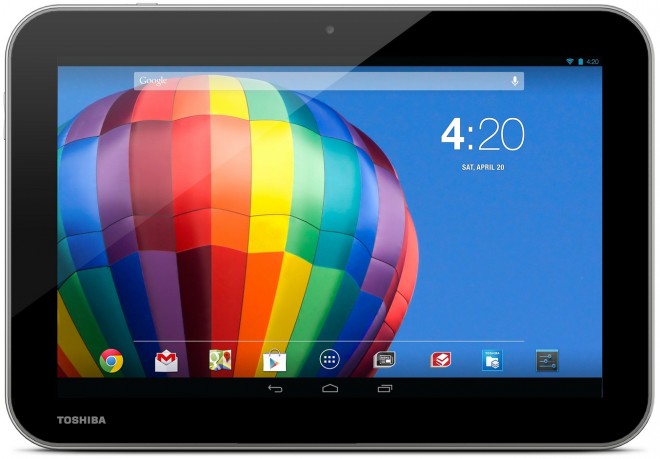 Toshiba will also release a new “2-in-1” keyboard cover keyboard made to fit these three new Excite tablets. It has a raised tile Bluetooth keyboard and magnetized notch on the cover.