Tablet accessories brand Brydge has announced a new iPad Pro 12.9 keyboard they like to call 12.9 MAX+. This iPad Pro keyboard is compatible with both the new iPad Pro 12.9, and the previous 3rd and 4th generation iPad pro 12.9. It will launch for $249 in June, which should be just weeks after Apple’s iPad Pro release in the second half of May.

It’s been designed to compliment the iPad Pro 12.9 in terms of looks, so the tablet combined with the 12.9 MAX+ keyboard will make it look like a MacBook of sorts.

The name MAX denotes the large trackpad, which Brydge says is the largest ever fitted to a tablet keyboard. I haven’t brought out my ruler to verify their claim, but based on my knowledge of tablet keyboards, this seems right. 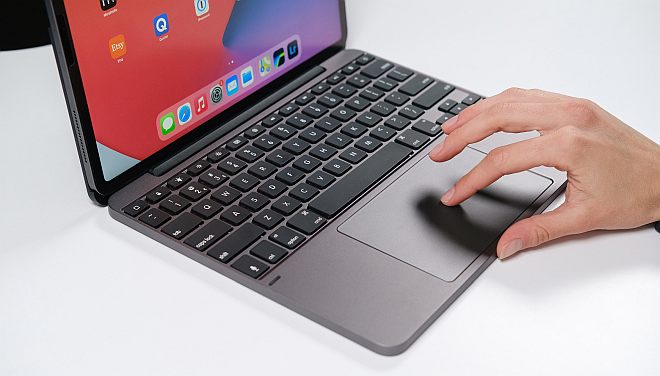 Specs and features includes a backlit keyboard that can be turned on and off, where the battery life is 180 hours on one charge without the backlit function, and 40 hours while backlit.

It’s 17mm thick, and weighs 970 grams. This is obviously very heavy for a tablet keyboard, but in order to prevent the iPad from tilting over, this sort of weight is necessary. Many attached tablet keyboards 4-5 years ago were actually so light, that they would regularly make a tablet keel over.

Though of course the weigh reduces the mobility aspect of the iPad to some degree.