MSI was the 4th computer manufacturer to unveil a Windows 8 tablet at Computex in Taiwan this week.
Called the MSI Slider S20 Ultrabook, this is a laptop and tablet hybrid in what MSI brands their new generation Ultra Laptop Series. The platinum trimmed Slider S20 can be used as a notebook or collapsed into a tablet. So the screen does not disconnect like some other Windows 8 tablets recently unveiled.

[UPDATED: This little rocket have now been released 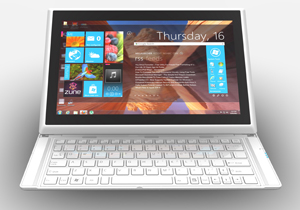 Despite MSI’s claims that the Intel processor is power-conserving and the Ultra Laptop series having a Turbo Battery+ hotkey to shut off idle devices, battery life is only expected to last 8 hours, which is not setting any new any records.
To be released sometimes after Windows 8 is released, here is what else is known about this ultrabook: 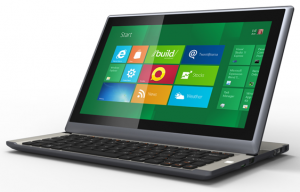