Microsoft is going to continue the huge discount on Microsoft Surface well into Cyber Monday 2013.

[UPDATED: See options on where to get Microsoft Surface on sale.]

The sale on Surface started on Thursday, just a little while before Black Friday, with the price on the 32GB Microsoft Surface seeing a cut from $349 down to $199. Fortunately the discount wasn’t just intended for Black Friday, but will stay in effect through Cyber Monday as well.

To make it abundantly clear to the whole world that Microsoft Surface is on sale this Black Friday weekend/Cyber Monday week, Microsoft has released one of the largest banners I have ever seen for a tablet. 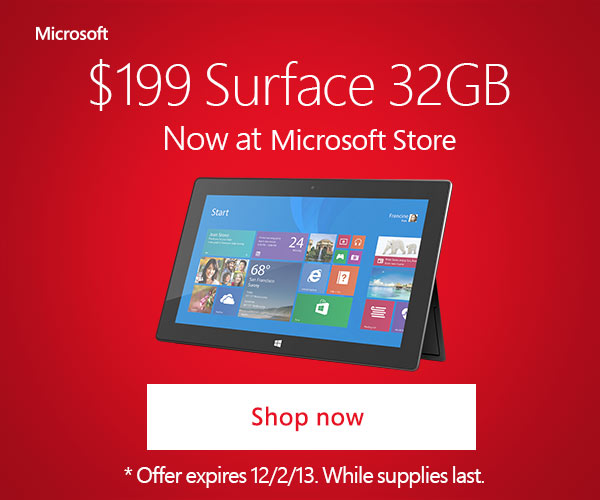 In addition to the sale of the Surface as a stand-alone tablet, Microsoft Store is also offering a build-your-own bundle deal that includes the Surface, a selection of 8 different Touch Covers or Type Covers, a Windows Store gift card, warranty protection for Surface, and a choice of 9 different sleeves, for a total sum of $368.

I personally don’t think the bundle looks like a good deal. A simple bundle with just a Touch Cover or Type Cover would have been much better. Already bundled in however is Microsoft Office Home (which means full versions of Word, Excel, PowerPoint, and OneNote) and Student 2013 RT.

At these prices you could almost say you buy Office and get a tablet for free, almost. So, whatever you may feel about the Surface RT, it looks like it will remain by far the cheapest Windows tablet available in 2013.

The two Microsoft Surface Cyber Monday deals are available in both the US and Canada.