Microsoft announced two new Windows 10 Surface tablet computers today as a part of their Windows 10 Device event on stage in New York. Both the new Microsoft Surface Pro 4 and the new Surface Book are top-end devices that will be very hard to outdo with up to 16GB RAM, 3000 x 2000 resolution, and 1TB storage, so these two new Windows 10 powerhouses will be on top of a lot of peoples Christmas wish list this holiday.

The new Microsoft Surface Pro 4 have started accepting orders from the official stores in USA and Canada from today on, and will launch on October 26:
US: http://www.microsoftstore.com/store/msusa/en_US/pdp/Surface-Pro-4/

Microsoft Surface Pro 4
The new Surface Pro 4 is an exciting 12.3-inch Windows 10 Pro tablet that offers customization options we’ve never seen on a tablet before. The screen has grown from 12 inches to 12.3 inches and now has a PixelSense display with resolution of 2763 x 1824, giving it a ppi of 267 while keeping the 3:2 aspect ratio.

The processor choices are now the latest 6th gen. Intel Core m3, Intel Core i5, or Intel Core i7 which runs cooler than before and offers 30% more CPU performance than on the Surface Pro 3. 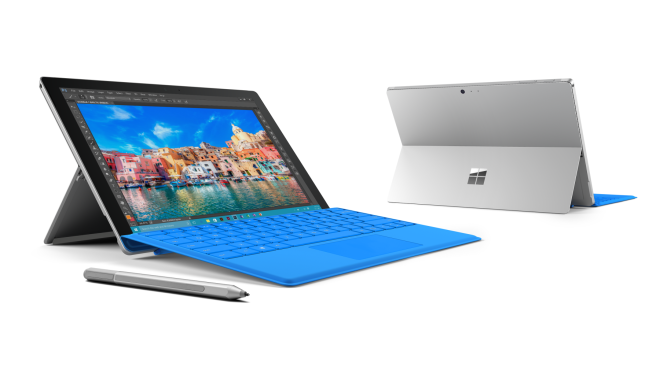 Surface Pro 4 has full range dual-band 802.11 a/b/g/n/ac Wi-Fi, Bluetooth 4.0, and a full size USB 3.0 port. The rear camera have also been upgraded to a 8MP camera, while the front camera has a 5MP resolution. The front stereo speakers have Dolby Audio technology.

It is thinner now too at 8.45 mm, and lighter even though the display is 0.3 inches larger, with a new weight of 766 grams. Battery life is 9 hours long.

The included Surface Pen has been redesigned and both looks more like a pencil now, and it has 1024 levels of pressure sensitivity and a new magnetic attachment to the Surface Pro 4. It’s a convenient solution that makes it easier to always have the pen available, like it was a clipboard – a principle the Surface team had in mind when designing the new Surface Pro 4.

The new Surface Pro 4 Type Cover is also a new redesign keyboard with better keys, optimal key spacing, and even more quiet keys. Quiet keys is actually a huge deal as I think people will agree with me on. Optional on the keyboard is a fingerprint reader too. 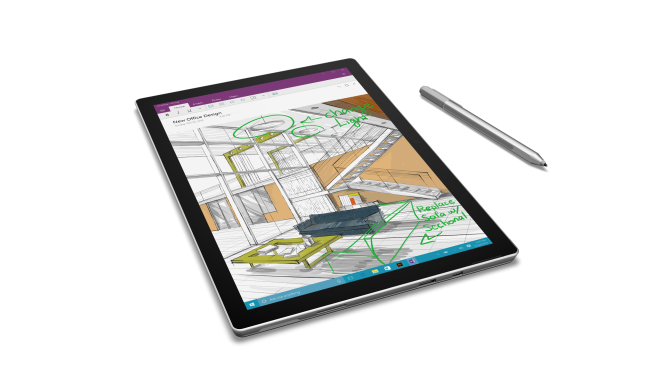 The Surface Book is the worlds most powerful computer available on the market, not just among Windows 10 Pro computers. It has a 13.5-inch PixelSense screen with 3000 x 2000 resolution, giving it a ppi of 267. And despite the large screen and high resolution, it still has a 12 hour battery life, which is very impressive.

There are a couple of configuration and power options on the Surface Book. Processor options are either the latest Intel Core i5 or i7, and with that either a Intel HD graphics GPU on the i5 model, or a Nvidia GeForce graphics GPU on the i5 and i7. As for memory the options are either 8GB or 16GB of RAM, and it’s DDR5 RAM! So it’s like having a tablet from the future. 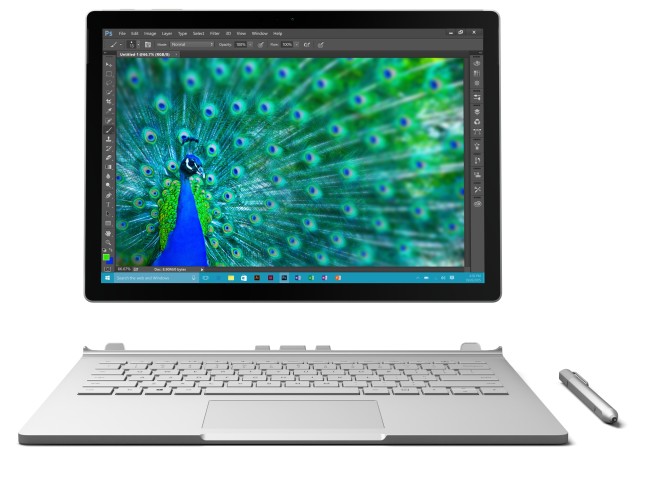 Other main specs include Dolby audio stereo speakers, dual-band 802.11 a/b/g/n/ac Wi-Fi, Bluetooth 4.0, two full size USB 3.0 ports, a 5MP front camera, and a 8MP rear camera. The weight is 728 grams, which is very impressive, with a casing made of magnesium.

The Surface Book, just like the Surface Pro 4 is built to facilitate the Surface Pen, which is why Microsoft chose the PixelSense display that offers a very fluid and natural screen writing experience.

The keyboard dock has backlit keys, and a sensitive but smart glass covered trackpad. The dynamic hinges are not entirely new, but Microsoft has wrapped the hinges with flexible and protective socks that cover the actual hinges, which blends in well with the overall design.

Microsoft Surface Book is available for order from the official stores in both USA and Canada today, and they will be launched on October 26: 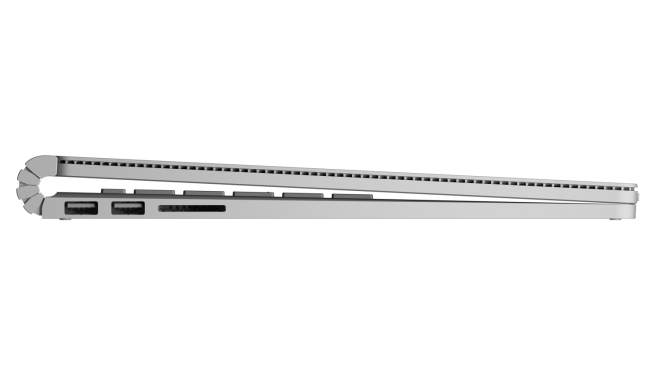