We’re a little over half way through Cyber Monday and we have seen retailers websites crash from overloads, payment systems go down, and some people being unfocused at work.

Amazon rules Cyber Monday above all the others, but unfortunately are not all of their deals predictable, since Amazon both cuts price of existing deals or suddenly launches new deals with their “Flash Sale” procedure. If the last three years are any guidance, the majority of the best tablet deals from Amazon comes after we are half way through the day.

For tablets, computers, and accessories, these flash deals can be found here:
http://www.amazon.com/Deals-Computers/b/ref=cmdw2015_ln_comps?ie=UTF8&node=759498

As for Microsoft, there are still some deals left, even though some of their best deals have sold out. Microsoft has Cyber Monday deals today on tablets, laptops, desktop computers, AIO’s, Windows phones, Xbox games and Xbox consoles, on software and games, and on accessories, Bluetooth speakers, or smart technology like watches.

The best Microsoft Cyber Monday deals today in terms of value for money, are the following three:
Acer Aspire One Cloudbook 11
– $139 for a 11.6-inch Windows 10 laptop with an Intel Celeron N3050 processor.

Although it depends on your needs. For others it might be Xbox One, Office, or JBL speakers. And if neither of these products were for you, then Microsoft isn’t done yet. Starting tomorrow, on December 1 is Microsoft’s Daily Deals too, with two weeks of one new deal every day. On December 1, the HP Pavilion x360 will be on sale, while on December 2, the 15.6-inch Lenovo Ideapad 100 will be on sale for just $199.

Until then, our Cyber Monday Tablet Deals page will be updated until the main Cyber Monday deals ends on Tuesday. 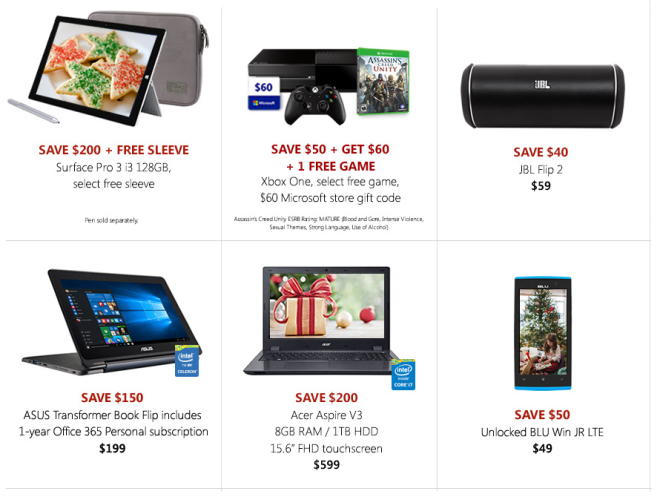