Microsoft have just announced the date for this year’s Windows 10 event in New York, and it is October 26.

Unfortunately, unlike last year, Microsoft have not given us any hints or clues this year about what devices and features we will be treated to. On their announcement page, Microsoft is merely teasing us with the words “Imagine what you’ll do”.

So what can we expect of the Windows 10 event on October 26, 2016?
There seems to be new developments and even brand new products on both the product and service side. Microsoft does have a lot of new feature developments in the works on Windows 10 Redstone 2, and also with Windows 10 Mobile in particular, but it is unclear what of those features, if any, will be announced in 3 weeks time.

On the hardware side, based on previous leaks, a 27-inch Surface AIO computer is the most anticipated device now.

Successors to Surface Pro 4 and Surface Book are currently not expected before April 2017, but sources in the supply chain have previously said that these two 2-in-1 tablets may nonetheless be upgraded to feature the latest 7th. generation Intel Core “Kaby Lake” processors.

At some point there may be a Surface 4 too, unless Microsoft have decided to stop the project.

Based on FCC approvals and other certification filings, there have been solid leaks on a Surface Ergonomic Keyboard, as well as an upgraded Designer Bluetooth Desktop kit which might be rebranded to some kind of Surface Keyboard along with a possible Surface Mouse. The current Microsoft Designer Bluetooth Desktop is out of stock right now. It should be noted that Microsoft generally makes a lot of keyboards though.

As much as four new Microsoft keyboards have been certified, with three of these having Microsoft model numbers 1741, 1742, and 1786, the latter of which is also named Microsoft Bluetooth Keyboard, but how many new keyboards we are going to see on October 26, and if any of these are built particularly for the Surface AIO is unclear.

A new Xbox controller with model number 1708 have also been FCC approved, and there have been developments on parts of the HoloLens as well.

Microsoft is good at preventing leaks far ahead, so there should be surprises too. But we will see what turns up in the 3 weeks ahead of the Windows 10 event. 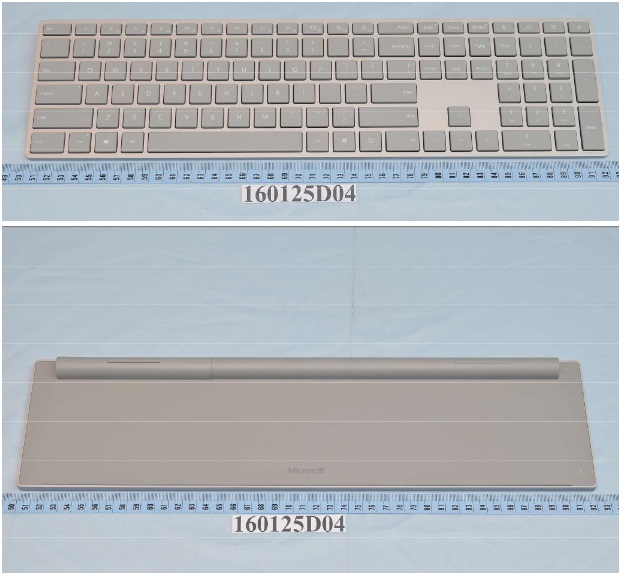 One of the redesigned Designer Bluetooth Desktop kit keyboards that may be rebranded Surface Keyboard of some kind. Filed with the FCC over half a year ago.