We’re seeing a very welcome selection of tablet computers on sale now in March, and this time around the tablet deals are across the board, ranging from the smallest iPads to the large Windows tablets, and the bestselling Android tablets.

Here’s my breakdown of the March tablet deals so far, though I’ll add more to this list if any more tablets goes on sale this month.

I guess the first one is obvious. After Apple announced the new iPad Air 5 this week, the predecessor iPad Air 4 was immediately cut by $100 before it goes out of stock.

Another iPad on sale is the top rated pocket rocket iPad mini which is on sale for $459. 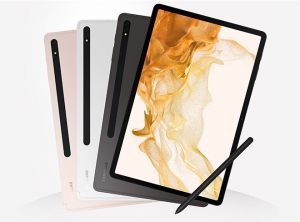 A different tablet that was recently replaced was the Samsung Galaxy Tab S7 series, so naturally these tablets are on sale too before the inventory is all empty. The Tab S7 and Tab S7+ are updated to Android 12 and Android 13 so they will continue to stay relevant alongside the tab S8 tablets.

Samsung Electronics Galaxy Tab A8 is on sale as one of the most popular sub-$200 tablets, starting at $179 in March.

Microsoft Surface Pro X (SQ1) has dropped to a new low price of just under $699 now, which includes 4G of course.

Surface Go 3 is also on sale with the Intel Core i3 processor, with a 10% discount we’ve seen now and then the last couple of weeks.

Another Windows tablet on sale is the Chuwi Hi10X starting at $220, or $270 with the keyboard.

Chrome tablets on sale in March includes the Asus Chromebook Detachable CM3 already, which includes keyboard and the stylus pen.

And finally there’s also a 43% discount on one of the most popular Jamjake pencils for iPads. With a price of just $26.99 it’s a lot cheaper than Apple’s own stylus pens.