I’ve got a new Lenovo leak today on another unannounced upcoming tablet, and this time it’s for a 6GB RAM Android 10 tablet.

It’s been a year already since Samsung launched the 6GB and 8GB RAM Samsung Galaxy Tab S6, the first Android tablets for the consumer market to feature over 4GB of RAM, so it was only a matter of time before Lenovo would follow suit.

The upcoming Lenovo tablet with 6GB of RAM was certified with the Bluetooth certification body this seek, featuring Bluetooth 5.1, and based on the Lenovo TB-J706L model number, this tablet is logically a successor to the Lenovo Smart Tab P10, which was a likeable tablet at 10.1 inches. 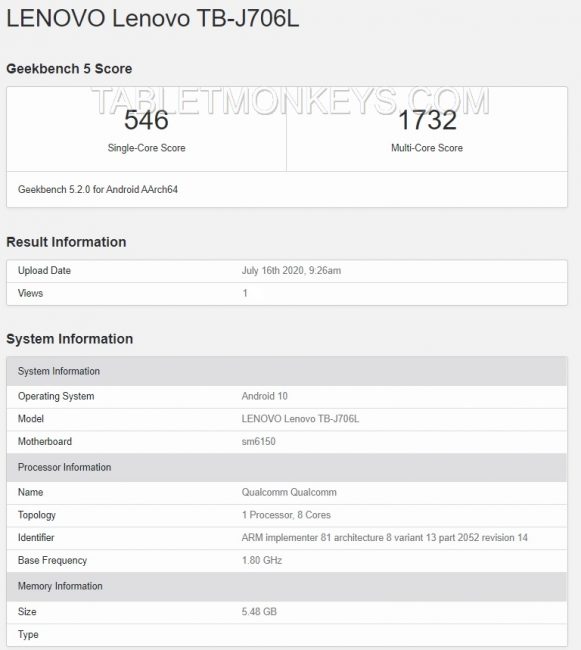 Lenovo TB-J706L was FCC approved this week too, and so far it looks like another tablet in the 10-inch category.

Lenovo’s 6GB RAM tablet was also benchmarked last month, where Lenovo TB-J706L achieved benchmark scores of 546 in single-core and 1732 in multi-core scores on Geekbench 5. So because this tablet is powered by the octa-core Qualcomm Snapdragon 675 processor, it only performs at about 60% of the capacity of the new Samsung Galaxy Tab S7 tablets.

The Qualcomm Snapdragon 675 processor is used on other mobile devices, like the Samsung Galaxy A71.

That’s still pretty decent for an Android tablet though.