In January two supply chain sources claimed that Apple was moving into phablets in 2018, or with at least one phablet, a smartphone so large it can almost pass for a tablet.

During the weekend two purported pictures of the display of a potential 6.5-inch Apple iPhone phablet, where the pictures were alleged to be taken at a LG production facility were posted at an online forum. LG is among the largest OLED display manufacturers, and is expected to supply Apple with OLED displays over Apple’s current supplier Samsung.

The two original pictures of the purported iPhone X Plus have since been deleted from the slightly stirred up forum where they had been posted, but can be seen on MacRumors. The display resolution is believed to be 2688 x 1242, which says a bit about how long this phablet is. 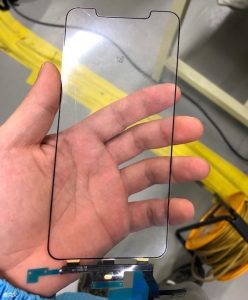 The first industry sources from January only said that Apple was experimenting with various sizes, but had not decided on the sizes and form factor yet. Launch is still not expected before September anyway, so we should get more leaks, and above all leaks from more familiar sources ahead of launch.

Apple is currently believed to work on as much as 5 new iPhones for the next 3 years, with the most radical one being a foldable dual-screen one for 2020. A possible iPhone SE 2 have also been rumored, at 4 inches.

However it is the large iPhones that are believed to be closest to launch at the moment, with a 6.5-inch phablet with OLED, a 6.1-inch with LCD, and a new 5.8-inch OLED iPhone that is looked at the closest right now and with the highest probability of a launch late in 2018.

In iPads, the earliest we can expect a new iPad has at one point been believed to be in March already.
This would then be the new 9.7-inch low cost $259 iPad, and it is believed that Apple will apply some of the same pricing strategy on iPhones in 2018 as well to gain some marketshares.