After a decade of tablet launches, the majority of the tablets that have been launched have featured IPS panels. These are displays that makes it possible to view the screen from all sorts of angles without experiencing any form of visual distortion.

In some cases that may be something of a drawback, at least if you are using your tablet computer in public and you don’t want people around you to snoop too much into your affairs.

This is why privacy screens are sometimes added to tablet computers as a tablet accessory. They will reduce the normal 178 degree viewing angle of an IPS panel to a lot less. 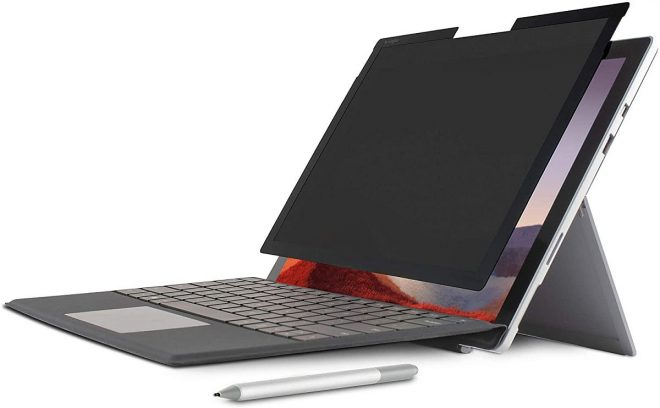 In a few days, Kensington will be launching a Surface Pro 7 privacy screen by the name Kensington MagPro Elite Magnetic Privacy Screen, which will also fit earlier models, including Microsoft Pro 6, Pro 5, and Pro 4.

The privacy screen attaches magnetically to the screen, and narrows the complete viewing angle to +/- 30 degrees in all directions.

Kingston even added an additional blue light filter to the privacy screen, and claims that the touchscreen will be just as responsive as before for both fingers and digitizer pens.