Jumper, one of the Chinese tablet brands that occasionally comes up with interesting tablets have just launched their latest 11.6-inch Windows 10 2-in-1 tablet Jumper EZpad Go for just under $389: https://www.gearbest.com/2in1-laptops/

It includes the 2-in-1 tablet with built-in kickstand, the Surface type keyboard, and even a digitizer pen. So that seems like decent value for your hard earned bucks, but by Q1 2019, the main issue I would have with it would be the Intel Celeron N3450 processor.

This is a processor that’s decent for running background tasks with some power, but it’s not a snappy processor for general use, and I find that they can appear sluggish even in we browsing. But for running apps in the background, the processor is okay. The other highlights are mainly full Wi-Fi cover, two USB 3.0 ports, and a micro-HDMI port.

Surprisingly it only has a 3500 mAh battery capacity, which I think is way too small. So that makes this Windows tablet more of a stationary tablet where you have additional power access available, since the battery life will probably be 2.5 – 3 hours at the most with the screen brightness turn up fully.

Jumper EZpad Go only has a 2MP front camera thought at least it has speakers. The tablet is 9.1mm thick, but weighs 800 grams, which makes you wonder if it was made out of scrap metal.

So it makes me wonder what Jumper was thinking when they put this tablet together, since this could have been an interesting tablet with a little more thought put into it.

A much better alternative in the 11.6-inch Windows 10 category would be the Alldocube KNote 5 which is powered by a better and more modern N4100 processor, and as it’s based on the Huawei MateBook design, it is lighter and more mobile too. 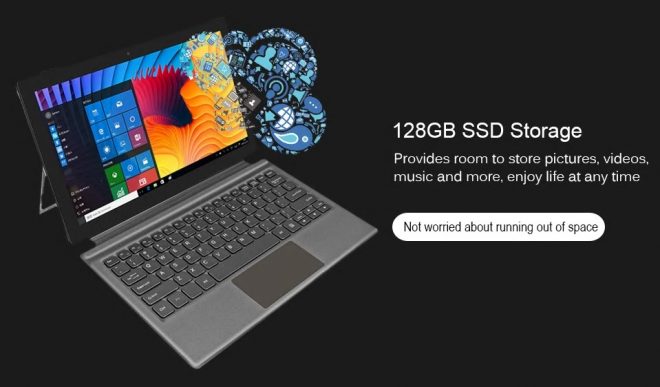