It’s been a couple of years since we wrote about Microsoft’s Touch Covers, since these thin alcantara/leather like keyboards for the Surface tablets were discontinued by the time the Surface Pro 3 came along, where the main keyboard since then have been the Type Cover.

But now computer journalist Roland Quandt have just discovered that Microsoft have on record a keyboard called “iPad Touch Cover” with Microsoft’s model number 1719. Not a whole lot more is known at this point though, other than the specified 0.814 Wh pr cell of the Li-ion battery.

The document belongs to a list published on April 17th this year, which covers battery transportation documents for Microsoft products. 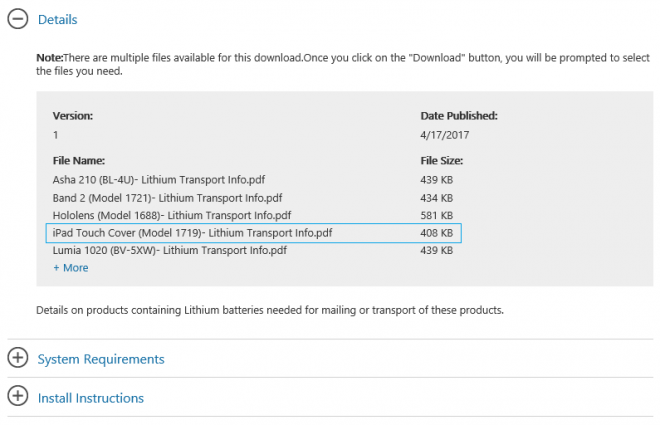 There were two versions of Microsoft’s Touch Cover, with the second edition simply called Touch Cover 2, both of which were backlit keyboards that came in grey, blue, pink, white, and even pink.

These Touch Cover keyboards had a little of the same feel of the Apple Smart Keyboard for iPad, but have more features and a different design.