The HP Split x2 hybrid tablet with Windows 8 was officially unveiled today, together with the Android hybrid HP SlateBook x2.

HP Split x2
HP calls both of these two new hybrid tablets for detachable PC’s as well. A name as good as anything else.
Either way the HP Split x2 is a 13.3-inch (1366×768) Windows 8 tablet with a detachable keyboard/dock, to be released in August, starting at $799.99.

(UPDATED: The HP Split x2 is now in stores

, ready to be delivered.) 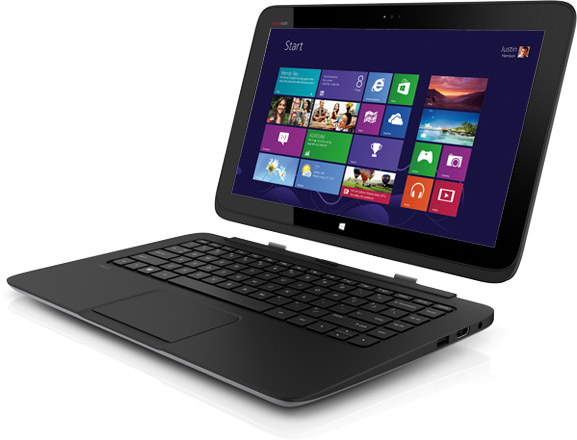 The tablet is powered by you the customers choice of either a Intel Core i3 or i5, a familiar choice on Windows 8 tablets. HP Split x2 has 2GB of DDR3 (533MHz) RAM.

Other notable specs and features are the 128GB memory (on the tablet), Beats Audio for a better sound quality, a 2 Megapixel HP TrueVision Full HD webcam and 8 Megapixel rear camera, and when you connect the tablet to the keyboard, you get the increased battery life from the built in battery of the dock, in addition to a 500GB hard drive, HDMI connectivity, 1x USB 3.0 & 1x USB 2.0, and an microSD card slot.