Don’t know if Best Buy disregarded the embargo date or not, but the HP Chromebook x2 that HP sayid they would release on June 10 has become available from Best Buy, though it doesn’t appear to be available for order online, only in store. The price is $599 and it’s not sold from HP yet.

Specs are a mixed for a Chromebook, with the Chromebook x2 featuring a 12.3-inch screen with 2400 x 1600 resolution with digitizer and Gorilla Glass 4, while it’s powered by a 7th gen. Intel Core m3 (7Y30) “Kaby Lake” processor with Intel HD Graphics 615, and options of 4GB or 8GB of (LPDDR3) RAM, though the price for the top model have yet to be announced.

Considering the processor, you would probably expect this tablet to feature more than 32GB of storage then, but no. And that’s the maximum storage. It appears that the entry level model may have even less storage, but on the other side the Chromebook x2 has support for miroSD cards all the way up to 256GB, and comes with 2 years worth of free Google Cloud storage.

Apart from these specs and features, the rest of the Chromebook x2 is very much like the two Windows 10 and Windows 10 S versions of the HP Envy x2 that the Chromebook x2 is built upon. So that means the usual good stuff like a 5MP front camera, a 13MP rear camera, Bang & Olufsen stereo speakers, 2x USB Type-C ports, and a 3.5mm audio jack.

HP Chromebook x2 is 8.2mm thick and weighs 1.62 lbs or 735 grams. Battery life is described as up to 10 hours long from the 48Whr battery, though they haven’t said what standard the battery life was measured against. 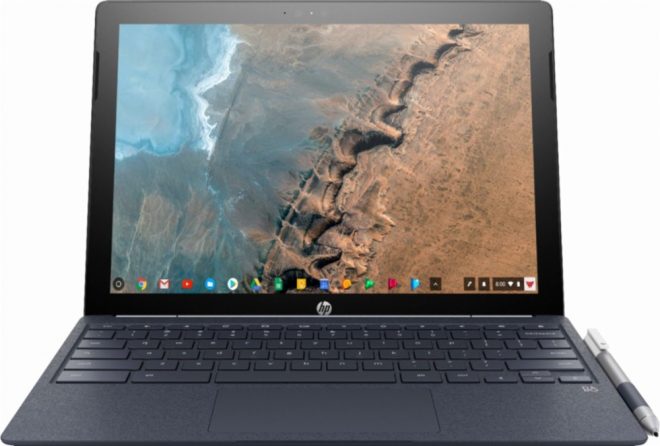