It looks like Teclast has their first Android 7.0 tablet in production, after I noticed a new tablet called Teclast T10 benchmarked today, and it’s not the Teclast Tbook 10 S either, although the full product name of the Teclast T10 tablet may become longer upon launch.

But based on the more or less accurate benchmark specs, we might soon greet the Teclast T10 tablet with Android 7.0 with possibly no additional user interface (which Teclast have generally moved away from the last year anyway).

And something around a 9.4-inch screen, with a high 2560 x 1600 resolution on the display, and Teclast has ditched Intel Atom’s for this tablet and instead gone for a more powerful hexa-core 2.1 GHz MediaTek MT8173 processor with Imagination Technologies PowerVR Rogue GX6250 GPU, 4GB of RAM, and 64GB of storage.

And hold on to your hat, because the Teclast T10 won’t feature the typical low resolution cameras we have seen on so many Teclast tablets, but instead a whopping 13MP (12.9MP) rear camera with 4K video recording, and a 8MP (7.9MP) front camera. So this tablet could become something of a gamechanger for Teclast, though we’ll have to test it first and see these cameras in practice. And next, there’s the question of the Wi-Fi and battery. But this tablet looks interesting so far. 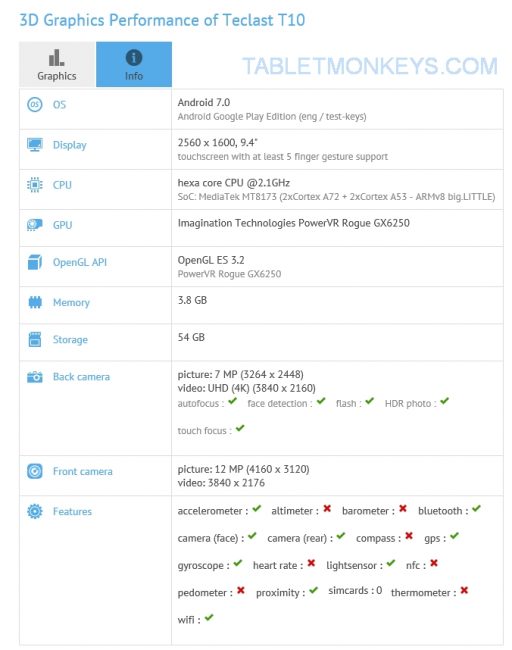