It looks like the first Samsung Galaxy Tab S5e benchmark score indicator have been run last night, though I can’t vouch for how real this is yet.

In Geekbench 4, the Samsung Galaxy Tab S5e (SM-T725 4G LTE) achieved benchmark scores of 1676 in single-core and 5740 in multi-core scores. These benchmark figures would be almost in line with what we would expect from the Qualcomm Snapdragon 670 processor as long as we take into consideration Samsung’s anti-overclocking policy which lets chipsets perform slightly more modest than at absolute peak performance.

As you’ll notice from the benchmarks though, it was actually listed with a Qualcomm Snadragon 710 processor, not the QSD 670 processor Samsung has said the tablet will run at launch. The model in the benchmark would be the 4G LTE model with 4GB of RAM at least, which leaves us with a couple of options. 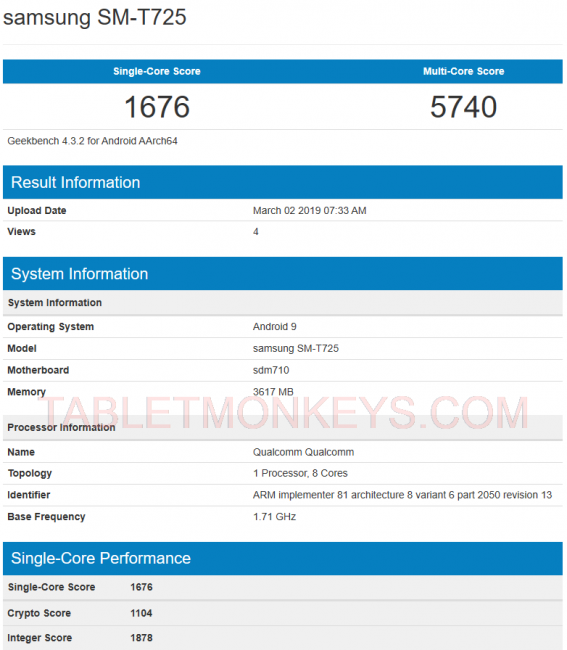 Another option is that the processor was masked in the benchmark. Or finally we could be looking at a benchmark that has been made up altogether. I think we should be able to find out within the coming week though.

Samsung Galaxy Tab S5e will be released in 2 months for a lower price then the predecessor starting at $399 for the 4GB RAM version.