Asus was the second computer maker together with Acer to unveil the first Windows 8 tablets, one day before the official start of the Computex Technology Show in Taipei on June 4.

Asus unveiled a very, very wide range of Windows 8 tablets to say the least.
Dual-screen laptops, tablets with disconnecting keyboards, and desktops with removable tablet/screen were just some of the goodies unveiled by Asus. Here’s the breakdown:

Asus TAICHI
Taichi is a hybrid Notebook/Tablet, with two screens that work independently of each other, thanks to the new possibilities of Windows 8. The dual-screen Asus Taichi is a development of the Asus Zenbook (that only has one screen).

Asus Taichi will be sold with 11.6-inch and 13.3-inch FHD IPS displays with 1920×1080 resolution. Asus markets the Taichi as a “Notebook with a built-in Tablet”. Powered by the option of either a Intel Core i5 or i7, 4GB of RAM, choice between 128GB or 256GB SSD storage, it will also feature dual-band Wi-Fi, dual HD cameras, and uncommonly for a tablet, it should deliver great audio quality thanks to the Bang & Olufsen ICEpower and ASUS SonicMaster sound technology.

The Asus Taichi is available from $1199.

Asus Transformer Book
Then there’s the Asus Transformer Book line, an additional one-screen Windows 8 Notebook/Tablet hybrid that was first said to be sold with a choice of 11.6″, 13″ and 14″ Full HD screens (1920 x 1080) with IPS technology and multi-touch. At CES in January 2013 however, Asus said they would only release a 13.3″ edition, called Asus Transformer Book TX300. The notebook goes into tablet mode instantly when the screen is detached. Processor options are Intel Core i7-3517U or i5-3317U, SSD and HDD storage, 4GB of RAM, USB 3.0 ports, and 5MP rear cameras.
The release date for Asus Transformer Book, is May 21, 2013. (Available for order)

Asus Tablet 810 / Vivo Tab (TF810C) (Windows 8)
This 11.6-inch tablet (1366×768) with 178 degrees viewing angle, features a 10-point multi-touch Super IPS+ technology panel, promising a responsive Wacom digitizer stylus to offer a more natural writing experience. It has 64GB of storage, a battery-boosting mobile dock with QWERTY keyboard, touchpad and USB 3.0 ports, a 2MP front camera and a 8MP rear camera with autofocus and LED flash. ASUS SonicMaster sound technology that should elevate the sound quality a bit. It also has a built-in NFC sensor to communicate with other NFC-enabled devices, as well as Wi-Fi, and Bluetooth 4.0, G-Sensor, Light Sensor, Gyroscope, E-compass, and GPS. The 11.6 Asus 810 runs on the x86 version of Windows 8 and is powered by a Intel Atom Z2760. Price from $799,99. Optional docking costs $199.

Asus Tablet 600 / Vivo Tab RT (TF600T) (Windows RT)
Then there’s Asus normal sized Windows 8 tablet using a 10.1-inch display (1366×768), this tablet too using the 178 degrees viewing angle Super IPS+ display technology that makes a screen easier to read in strong light. And just like the 810 tablet, it also features the same battery-boosting mobile dock with QWERTY keyboard, touchpad, and USB 3.0 ports.
The Asus Tablet 600 is powered by the Tegra 3 “4-Plus-1 Quad-Core” CPU with 12-core GPU. What this means in practice is fast performance combined with low battery consumption compared to earlier processors. (See the battery life of Tegra 3 powered tablets.) Price from $599, while $199 for the docking.

It also lists most of the other specs that the 810 Tablet has, like a 2MP front camera and 8MP rear camera with autofocus and LED flash, the same ASUS SonicMaster audio technology, built-in NFC sensor for communication with other NFC-enabled devices, 802.11 b/g/n Wi-FI, 4.0C Bluetooth, GPS, G-Sensor, Light Sensor, Gyroscope, and E-compass. The 600 Tablet differs by running on Windows RT as opposed to the 810 Tablet that runs on Windows 8. Asus Tablet 600 also only comes with 32GB of storage.

Last, but certainly not least, is the Asus Transformer AiO.
Quickly making headlines such as “The worlds largest tablet,” the ASUS Transformer AiO is a massive 18.4-inch dual-boot Android/Windows “All-in-One” (AiO) tablet pc with docking/cradle. This massive tablet device utilize a 10-point multi touch display and ASUS SonicMaster audio optimization sound system. By clicking on a button on the left side of the tablet, you can switch between Android and Windows with a lag lasting just a second. The docking has height and tilt adjustments. 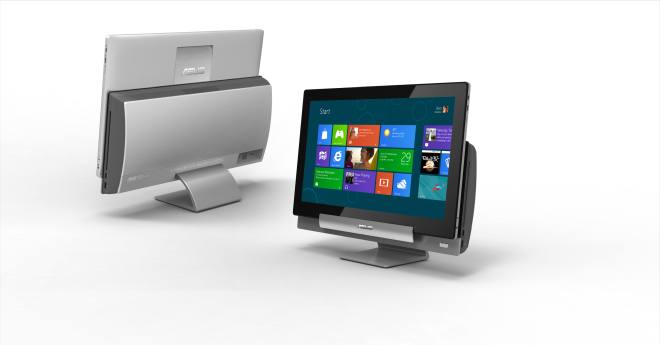 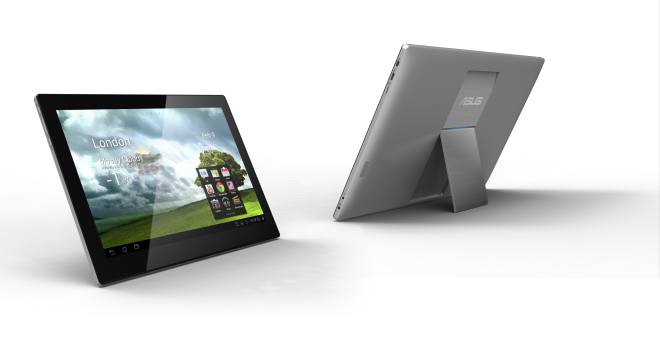 The dual OS AiO tablet/desktop was first just a prototype in June 2012, but was eventually released