The 8.9-inch HTC T1H tablet that have been leaked since last year now looks set to launch in Q2, more specifically in May it is believed.

Mind you, HTC still haven’t actually confirmed or unveiled this tablet, so we’ll still have to wait and see about the dates. And that’s not the only thing either, since this tablet currently sounds like it will be launched in China.

HTC T1H sounds by and large like the HTC Nexus 9, but it still has a few differences in hardware and design. The latest specs that have been purportedly leaked on Weibo continues to list it with a 2048 x 1536 resolution display and a 8.9-inch screen, much like the Nexus 9.

But it has a different processor, running a octa-core 2.2 GHz Allwinner H8 processor together with a PowerVR SGX544 GPU. Other important main specs include 2GB RAM, 16GB and 32GB storage options, a 1.6MP front camera, and a 8MP rear camera, Android 5.0, a thickness of 7.88 mm, and a 6700 mAh battery.

As we can see by the image from the Weibo leak, it has front stereo speakers, which continues HTC’s focus on delivering increasingly better sound on mobile devices such as phones and tablets. It’s also impossible to not be reminded of the current HTC smartphone design when we look at the speakers, since the tablet looks just like a wider version of the HTC One M9 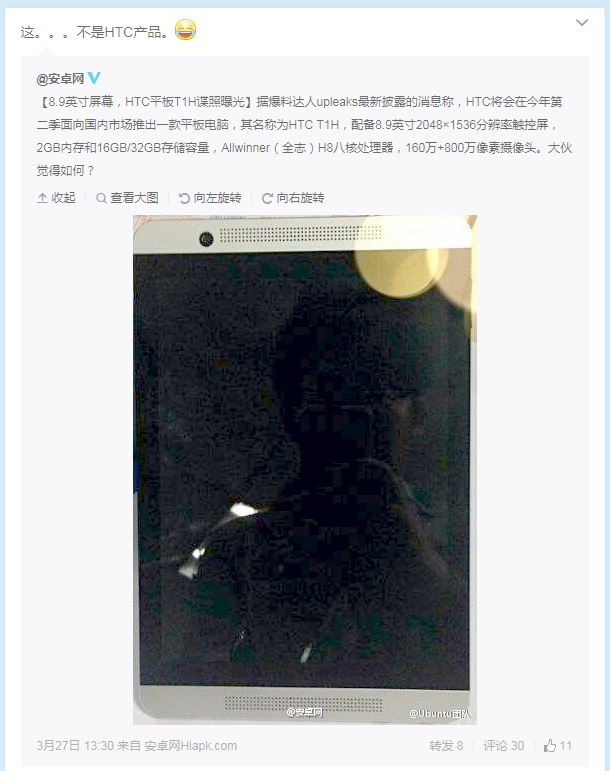