Guess who showed up again? It’s the little mystery tablet from Samsung that we first noticed back in February after it had been FCC approved then. And now once again the Samsung SM-T230NZ has shown up in an official registry, and this time with Android 8.0.

Meaning yes, finally a 7-inch Android 8.0 tablet, and from Samsung too. If the model number doesn’t sound all that new, it’s because this is where the mystery begins. Samsung has a 7-inch Android tablet on the market with model number SM-T230, and that’s the Samsung Galaxy Tab A 7.0, that launched in March 2016, though has since gone through OS upgrades. To make matters more complicated, the predecessor Samsung Galaxy Tab 4 7.0 had the same model number, even though the specs were different, and lower.

Theoretically it could be just the same Samsung Galaxy Tab A 7.0 tablet that is about to receive the Android 8.0 Oreo update, but that doesn’t explain why it has gone through the FCC, and not only that, but with sketches of the tablet that shows a differently designed tablet than that of the current Samsung Galaxy Tab A 7.0, with design features from some of the newest Samsung tablets, and either a LED flash on the back or a relocated speaker. That is, if we interpret the sketches as illustrating the tablet accurately. 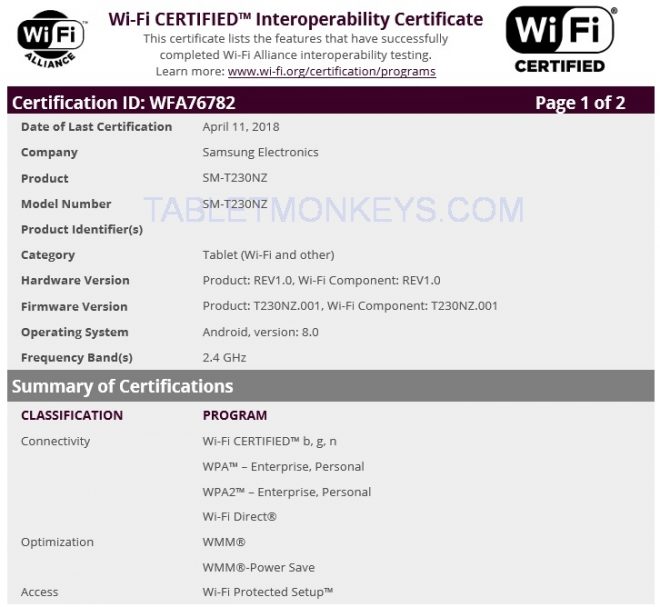 Either way a Samsung SM-T230 tablet has just been approved with Android 8.0 by the official Wi-Fi certification body today, so we know we’ll be getting a 7-inch Android 8.0 tablet from Samsung soon at least.

The Wi-Fi specs does not list it with either dual-band or ac Wi-Fi support, so the specs can hardly have been upgraded on this tablet.

The Galaxy Tab A 7.0 from before has a 1280 x 800 resolution display, a 1.5 GHz quad-core processor, 1.5GB of RAM, 2MP and 5MP front and rear cameras, with a 10 hour battery life. Samsung’s 7-inch Android tablets have been one of the bestselling tablets of all time, and have always been generally well liked by their owners.