LG have just taken their 11.6-inch Windows 8.1 tablet LG Tab-Book 2 and made an Android tablet out of it. The release of the tablet was announced in South Korea today.

But now LG have taken the Intel Core basis model 11T740 and slapped Android on it instead, and also a Intel Core i5 processor. So the Android version have an extra “A” in the model name, with the full model name being “11TA740-GA50K.” 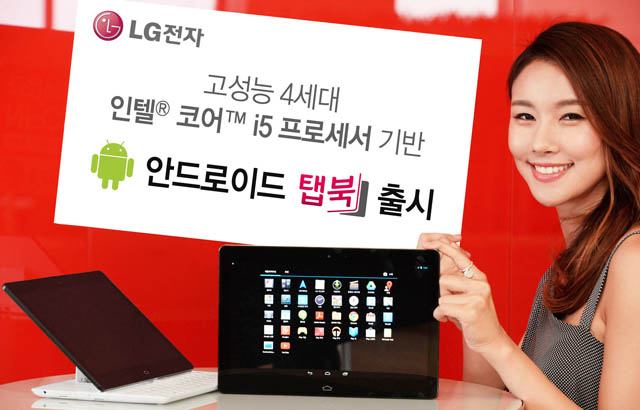 The specifications for the LG Tab-Book with Android are by and large identical to the Windows 8.1 model then. And these are an 11.6-inch screen with Full HD 1920 x 1080 resolution through an IPS display, Android 4.2 Jelly Bean, 4th gen. Intel Core i5, and a staggering 4GB of RAM, which is the most for any Android tablet so far.

The SSD hard drive have a capacity of 128GB, though there’s still a microSD card slot there just in case. While for ports, there’s USB 3.0 and a HMDI port. It has a lot of weight at 1050 gram, mostly because this is a slider more than a tablet.

These sliders aren’t cheap, so we’re probably looking at something in the $800 range if it’s even brought to the US one way or the other.

It’s a powerful Android tablet for sure, but not as mobile as its competitors such as Samsung Galaxy Note Pro 12.2. So the popularity of these sliders are pretty low.