If you have always liked the idea of the 10.8-inch Windows 10 tablet Surface 3 but for some reason never bought it, a new Surface 3 clone is about to launch for $179 with an international September 14 release date:
http://www.gearbest.com/tablet-pcs/pp_443419.html

The Windows 10 tablet is the new Jumper EZpad 5SE, a 10.6-inch tablet that is built very much according to the same principles as the Surface 3. That means, built-in kickstand, full-size USB 3.0 and USB 2.0 ports in addition to a micro-USB port, a Full HD 1920 x 1080 resolution Samsung display, 4GB of DDR3 RAM, and digitizer pen support.

The processor on the EZpad 5SE is the Intel Atom “Cherry Trail” x5-Z8300 processor with turbo boost up to 1.84 GHz, while it has 64GB of on-board eMMC storage and support for microSD card expansion up to 128GB.

Jumper EZpad 5SE is sold with 64-bit Windows 10 in English, but any other languages can be installed by the owners afterwards. Now if only the original Surface tablets were this cheap. 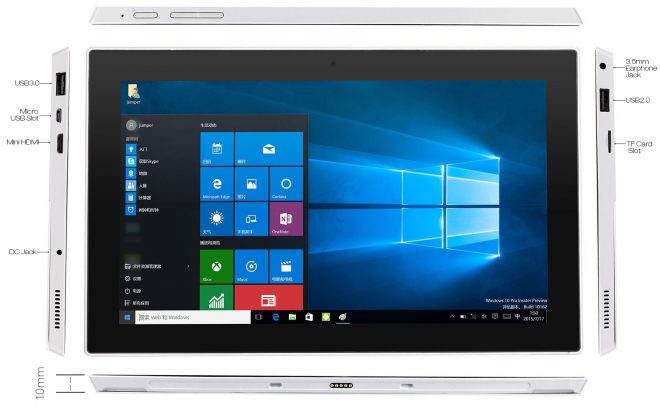