It’s been rumored for a while that Vivo will launch not just one but two tablets eventually, and we have seen some hard evidence of the first Vivo tablet at least, which started as early as last summer when the 8040 mAh battery had its specs officially listed through official registrars.

Now the latest evidence indicates that the rumor of dual rear cameras are true too, after the schematics for a Vivo Pad were discovered as published at the Chinese intellectual property administration, thanks to Mysmartprice.

The schematics illustrate a Vivo tablet in the 11-inch range with dual rear camera and a LED flash to the side of the cameras. So that’s a sign that Vivo will launch a high-end tablet as their first tablet. 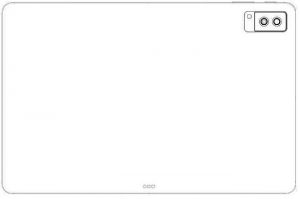 Based on previous rumors and leaks, the Vivo Pad will feature a Qualcomm Snapdragon 870 processor, 8MP and 13MP dual rear cameras, a stylus, optional keyboard, and some Weibo leakers says 8GB RAM too. So it’s likely to be pretty similar to the Oppo Pad.

Vivo is willing to experiment with their products to some degree, and lean towards quality focus, and they have produced smartphones with pop-up cameras, like the V15 Pro. So it could be fun to watch what they will bring to the tablet world in the years to come.

One Tablet And Two Foldables Expected From Vi...

Oppo, Vivo, Realme All To Launch Their First ...