Among the Chinese tablets, there’s one basis model that’s been very popular during the last year, and that’s the 9.7-inch “iPad sized” tablets with retina display and either Android or Windows OS, and later on dual OS tablets with both operating systems on board.

One of these basis models that have recently been upgraded from Bay Trail to Cherry Trail is the Teclast X98 Pro: http://www.everbuying.net/product1081123.html

The cameras are above average in terms of picture quality, with a 2MP front camera and a 5MP rear camera. 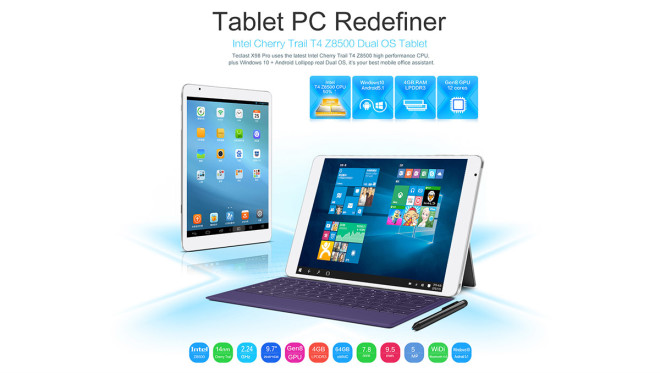 It has a battery capacity of 8000 mAh, which is good, but with this particular model, at least with the first firmware, the combined power of the processor and the high resolution of the display drags the battery life down to 5 hours, which is lower than that of its predecessor from last year.

On top of that, several of the first owners have reported a heating issue which is more than noticeable, a problem that becomes more significant the harder the tablet is pressed, like you would expect from some very hardware demanding computer games.

If it wasn’t for these issues I would have forgiven it the single-band 802.11 b/g/n Wi-Fi too. Teclast has put some thought into this tablet, they’ve even manufactured a suitable keyboard

cover for it, and this is a tablet that can stream 4K video.

But despite lacking some of the top hardware you’ll find in the the best tablets on the market, and despite the battery life and the heat issue, it can deliver performance wise. So in the end, cheap tablets like the Teclast X98 Pro does fit the use of many people in the end, just as long as they are aware of the shortcomings beforehand.