A great new tablet deal started today, with a Surface 3 sale that brings the price down from $499 to $399 on the entry level model, and $100 off every other Surface 3 model too:
http://www.microsoftstore.com/store/msusa/Surface-3/

So the Microsoft Surface 3 deal applies to all models, from 64GB to 128GB, Wi-Fi or 4G LTE models. And there’s no catch on this tablet either, the Surface 3 sale is just a plain good price cut with no ifs or buts.

So those are good news, since the Surface 3 is a great Windows 10 tablet in itself. It has a very crisp 10.8-inch ClearType screen with a resolution of 1920 x 1280 with a 3:2 aspect ratio (same screen ratio as Surface Pro 3). The screen also has 10 point multi-touch, and digitizer support with specific support for the Surface Pen digitizer in particular. 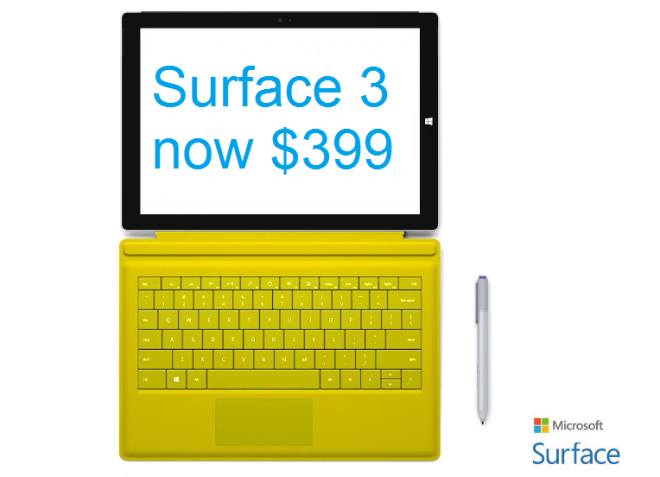 This tablet has complete dual-band 802.11 a/b/g/n/ac Wi-Fi support, Bluetooth 4.0, a 3.5MP front camera while there’s also a 8MP rear camera with autofocus, and they can both record 1080p video. It has stereo speakers with Dolby Audio technology, and a built-in mic. Sensors are ambient light sensor, a proximity sensor, accelerometer, gyroscope, and magnetometer. It also has a 10 hour long battery life, so nothing to complain about there either.

A full size USB 3.0 port is on board this tablet too. Other ports counts a Mini DisplayPort, a micro-USB charging port, a headset jack, and a cover port.