With the 8th day of 12 Days Of Deals from Microsoft, we get another Surface 3 deal ahead of the holidays, which this time bundles the 10.8-inch Surface 3 tablet with a $75 voucher from Microsoft. The Microsoft deal is available in both United States and Canada:
US: http://www.microsoftstore.com/store/msusa/en_US/pdp/Surface-3/

The $75 voucher with the Surface 3 deal is available with all Surface 3 tablets, ranging from the 64GB Wi-Fi version, to the 128GB 4G LTE version. The voucher can only be used upon check out when the value of a purchase is $75 or higher though, so it can be used for some accessories like a Surface keyboard cover or Surface Pen.

It is powered by the fastest Cherry Trail processor, with the 64-bit quad-core 1.6-2.4 GHz Intel Atom x7-Z8700 CPU. It also has a 3.5MP front camera, a 8MP rear camera with autofocus, both of which can record 1080p video. It has stereo speakers with Dolby Audio technology. Sensors are ambient light sensor, a proximity sensor, accelerometer, gyroscope, and magnetometer. 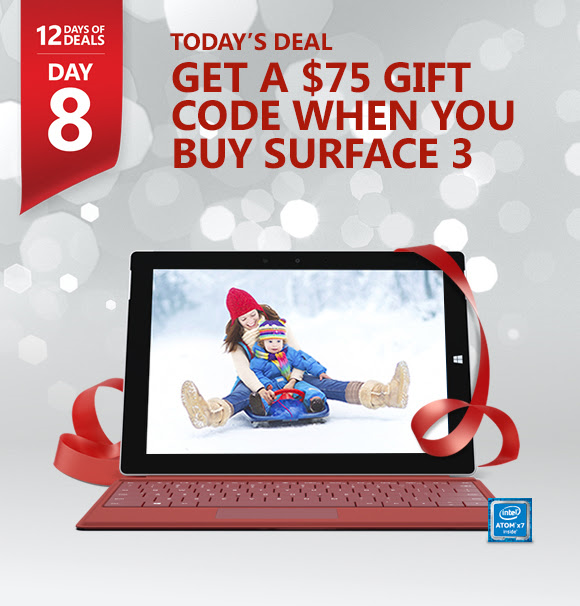 Other features include a USB 3.0 port, a Mini DisplayPort, a micro-USB charging port, a headset jack, and a cover port. Wi-Fi connectivity is good too with complete dual-band 802.11 a/b/g/n/ac Wi-Fi support, as well as Bluetooth 4.0, while the Surface 3 has a 10 hour battery life, which is good. Included with all Surface 3 purchases, and not just today’s Surface 3 deal, is a one-year subscription to Office 365 Personal.

The Surface 3 deal ends at 12PM PT, when this sale will be replaced by a tablet and laptop deal on selected Dell computers with Windows 10.