Skype got a little bit more like other IM services this week after Microsoft both unveiled new features, and reointroduced some that had been removed, most notably the native sharing on Android and iOS which allows sharing of content between Skype and other apps. 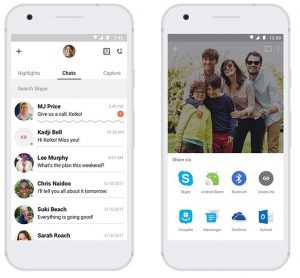 The status display of contacts on the home screen have also been brought back. So it’s nice to see that the present new Microsoft actually listens to its users.

New multi-tasking features have been added too, all in all demonstrating another step in Microsoft’s gradual move towards integrating Microsoft software and hardware, with all things digital that people use every day. And more changes to Skype and integration of Skype with other features have been promised by Microsoft for the near future.

There have been other updates to Windows 10 this week to, from tiny helpful updates in the new Paint 3D, to a new added segment in the Windows 10 appstore called “Apps to Study and Play Collection” where 18 of those apps are learning and productivity apps. The spin-off of the popular Minecraft: Story Mode Season 2, Episode 1, have also been added this week.

Microsoft also produced a brief video for some of the other news at Microsoft this week. The sound mixer that lets users add sound effects to conversations could be the highlight so far.