Samsung’s upcoming Windows 10 tablet Samsung SM-W700 is a device that we have been tracking for a while, and we have some new official info on it that confirms something essential.

The Samsung SM-W700 is now confirmed to be a tablet thanks to the Wi-Fi certification papers on the tablet that have been published. So it’s no longer a question whether it’s a tablet or a Windows phone.

Secondly, we also got some more Samsung SM-W700 specifications confirmed. And that’s the dual-band 2.4 GHz and 5 GHz 802.11 a/b/g/n/ac Wi-Fi bands it has. And with complete Wi-Fi cover, this would indicate that it’s a high-end tablet.

Samsung SM-W700 is also confirmed to run Windows 10 for OS.

From before, we have already reported that the first specs it was confirmed to have, were Bluetooth 4.1. 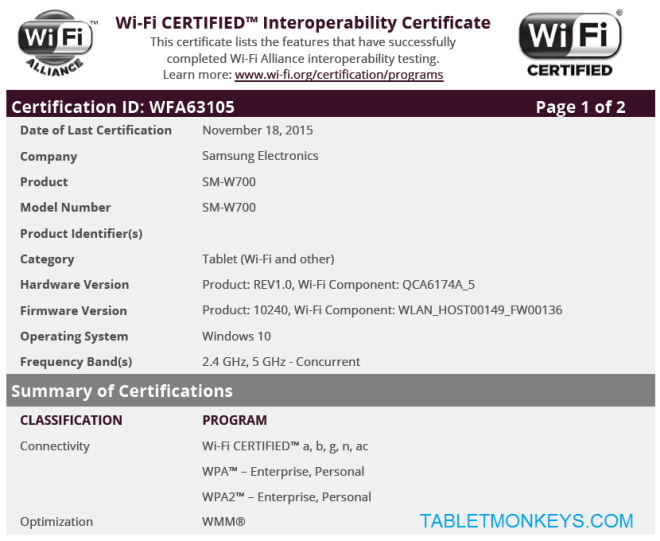 Other aspects of the Samsung SM-W700 that appears to be likely, but that can not be considered confirmed yet, is the 12-inch screen, since that was the first detail that leaked when we discovered this tablet in September. Though the specific dimension has yet to be confirmed. But us monkeys are working on it.

As far as rumors are concerned, this Samsung Windows 10 tablet is rumored to be a Super AMOLED 4K tablet powered by a choice of (at least) Intel Core m processors, with choice of 3840×2400 resolution, or 2560×1600 resolution, feature Samsung S Pen digitizer support, and be around 6.2mm thick with a weight of approximately 600 grams.

Our current estimate is that this Samsung 4K Windows 10 tablet will be unveiled at CES in Las Vegas in early January 2016. Now that would be a great start to the year. Samsung have book January 5 for a press event at CES, so that’s the first possible date for an official unveiling of Samsung’s 12-inch Windows 10 tablet. Based on the stated import price of the test unit that leaked out of India in September, I’ve calculated that the entry price looks like it will be set to $899.

Ahead of that, is the launch of the other 4K Windows 10 tablet, the new Dell XPS 12.