It’s been a long time since we heard any new rumors about Samsung Galaxy Tab S8 tablets, but we did get a chunk of new information today that’s worth looking at.

South Korean leaker and tech follower Tron have translated the detailed rumors of a series of purported Samsung Galaxy Tab S8 tablets that this time around counts as much as three models.

The 11-inch model seems to benefit from an even faster processor, but otherwise the same main specs. The same seems to be the case for the 12.4-inch model too. 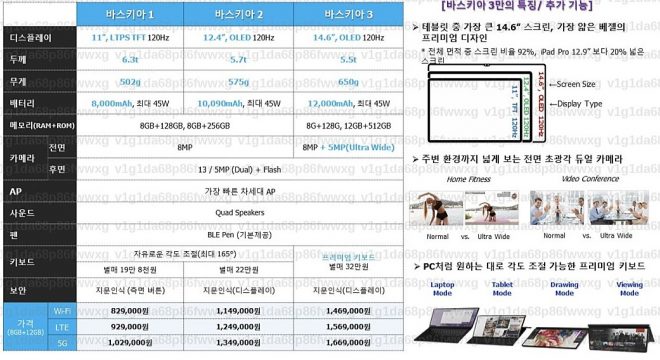 But then it looks like a totally new S-series Samsung tablet will join the family too, as a 14.6-inch tablet with detachable keyboard, OLED display, 120 Hz display rate, 12,000 mAh battery, and 12GB of RAM, with the codename Basquait 3 has been leaked through some internal documents.

One of the innovations is also described as a front wide dual camera for a wide view of the surrounding environment.

This is the first time that such a large Android tablet in Samsung’s S-series has been rumored, so I would think the earliest we can expect a tablet like this would be the right before Christmas.