The last week have been a curious one for Microsoft as it started selling the two Android phones Razer Phone and Samsung Galaxy S8, both being compatible with the Microsoft Launcher app, which is Microsoft’s gateway to Windows through Android phones at the moment:
https://www.microsoft.com/en-us/store/mobilelist

For ayone interested in buying the Samsung Galaxy S8, they should know that it will be sold with a $150 holiday discount on Thursday, November 23 from Microsoft Store.

Both of these phones have high specs, and while the brand new Razer Phone may have gotten some criticism over its square design, it sports some very impressive specs ranging from 8GB of DDR4 RAM, to a Qualcomm Snapdragon 835 processor, with a 5.7-inch Sharp IGZO display with 2560 x 1440 resolution and a 120 Hz refresh rate, which results in smooth scrolling, just like on the newest two iPad Pro tablets.

The other specs are all to an equally high standard, but it did affect the weight a lot though, as the Razer Phone is nearing tablet proportions in terms of weight, weighing in at 197 grams. 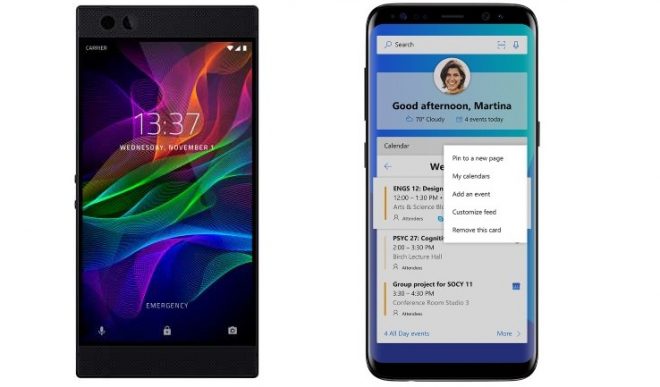